I have pictures of a ginormous swarm thrown off from my Russian bees, Hive Hera.  But, alas, I can't figure out how to get them off my phone in a vertical position. 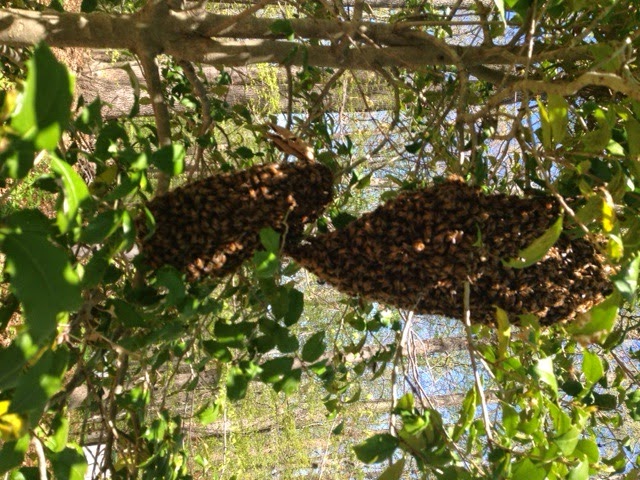 Cute Hubby will figure out this technological problem!  In the meantime, enjoy the sight of 30,000 plus bees dangling from a holly bush, in a sideways picture.

The sound when they started to swarm was simply amazing.  The humming was almost alien like.  And, before they settled on this branch (which was luckily only about 7 feet off the ground), the bee activity in the yard even freaked me out a bit.   The air smelled like lemons as they emitted a scent that tells 1/2 the hive... hey!  we are swarming, come with us!

Also, lucky that I had my buddy to help me gather these escapees and put them in a new hive.   Cute Hubby asked, "Have you done this before?"  I replied "No, but we can look it up online!"  And, he still agreed to help!   (I swear it was not my intention to have FOUR hives this year, Warren!)

It took a few passes and  some good limb shakes into a large box and a big dumping of thousands of bees in the new hive.   Then we watched as hundreds more calmly marched into their new home.

My only regret is that I didn't try to make a bee beard!

Then as we went out later in the evening to see if they were still happy, we heard the first Wood Thrushes of the year in the woods of the LoveNest.

Finally!   They were a day or two late and we were growing concerned.

Now, if only I can find Alvin, the chipmunk, it will really feel like spring!
Posted by Warren and Lisa Strobel at 12:28 PM