What do the birders know? 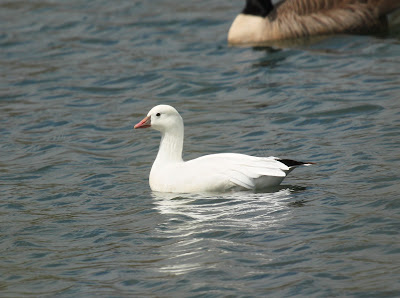 Since we keep records, and we watch, we know a lot. Like that a random Ross' Goose (above) showed up in April at Crownsville Containment Ponds, very near us. Who knew? Who would have known?

Or that "our" Wood Thrushes keep to a tight schedule. We have been keeping close records of their arrival ever since we moved to the Lovenest seven-plus years ago. Here is when we have first heard their lovely, flute-like song:

Here are the arrival records:


And that leads us to this lovely essay in the New York Times by Brian Kimberling, on the subject of birders, technology and climate change:


A BIRD-WATCHER is a kind of pious predator. To see a new bird is to capture it, metaphorically, and a rare bird or an F.O.Y. (First of the Year, for the uninitiated) is a kind of trophy. A list of birds seen on a given day is also a form of prayer, a thanksgiving for being alive at a certain time and place. Posting that list online is a 21st-century form of a votive offering. It’s unclear what deity presides.


There was prestige in knowing birds in ancient Rome, and there is prestige today. There are also competitive insect enthusiasts and tree connoisseurs and fungus aficionados, but they lack the cultural stature and sheer numbers of bird-watchers. There are 5.8 million bird-watchers in the United States, slightly more than the number of Americans in book clubs or residents of Wisconsin. That’s a huge army of primitive hunter-mystics decked out in sturdy hiking boots and nylon rain gear, consulting their smartphones to identify or imitate a particular quarry.
There is nothing especially new about them except for their gear. Two hundred years ago the heartland teemed with second sons of wealthy European families who could have stayed home dissipating in traditional style, but chose to go to the New World and find a new animal instead. Reporting your sightings to the Audubon Society is decidedly less glamorous than dispatching a new specimen to a museum in Paris or London, but it’s a kindred enterprise.
Today’s birders are not exploring new territory geographically, as the early naturalists did; rather, they are contouring the frontiers of climate change. It’s April, and the kitchen-window bird observer is limbering up, too. Are the birds nesting early, nesting late? (Do they know something we don’t?)
The reporting such observers do is crucial.
And what are today’s birds telling us? The Audubon Society estimates that nearly 60 percent of 305 bird species found in North America in winter are shifting northward and to higher elevations in response to climate change. For comparison, imagine the inhabitants of 30 states — using state residence as a proxy for species of American human — becoming disgruntled with forest fires and drought and severe weather events, and seeking out suitable new habitat.
The Audubon Society’s estimates rest largely on data supplied by volunteers in citizen-science projects like the Christmas Bird Count (first proposed in 1900, nine years after the first known use of the word “bird-watcher,” to set the hobby apart from the more traditional Christmas pastime of shooting birds). The birds in question have shifted an average of 35 miles north over a period of about 40 years — seemingly insignificant in human terms, but a major move ecologically.
Such documentation, drawing on databases and the practices of citizen science, is descended from folk wisdom, where birds are ascribed a certain predictive power. Folk wisdom holds that they nest high in anticipation of warm weather (not true) or fly low when they expect to get wet (true).
Folk wisdom has deep roots. “Auspice” and “augury” share a Latin origin with “avian.” An augur was a priest in ancient Rome who studied birds to determine the will of the gods (Cicero was one). When an elected official is inaugurated today, he or she is etymologically promoted to bird-watcher in chief. Mr. President, your binoculars. There are no accidental hawks or eagles in the “Iliad” or the “Odyssey,” either. This says more about humans than about birds. They remind us of time, hence the venerable history of the cuckoo clock. As James Baldwin noted, the whisper beneath the word “time” is death.
The ancient wisdom of fretting obsessively over bird behavior has obtained the vindication of modern science. Hawks and eagles do not appear by accident. When, where and whether they appear is, absolutely, a portent. The spotted owl is a bioindicator, a species that can be used to monitor the condition of an ecosystem. In other words, bioindicator is just modern parlance for omen.
And so the practice of bird-watching, no matter how geared up and teched out, cannot escape its ancient roots; or, rather, it has come back around. Birds are not moving north in anticipation of climate change; rather, they are moving in response to it. Still, they are becoming predictive in a manner not founded in superstition but well-documented in reported behavior.
We can’t escape trying to see the future through birds. Too many canaries were deployed to detect gas leaks in coal mines, too many ravens launched from ships to find land — bird anxiety is an essential component of the human predicament.
There is no telling what kinds of perverse ecological arrangements we will create for birds in the future, or what new technologies will be introduced to bird-watching. Google Glass, for example, has implications, and binoculars that double as digital or online field guides can’t be far away. We have reached an era when our instincts, anxieties and gadgets collide; our classical relationship with birds is reinforced and our understanding is enhanced. Unfortunately, we may need to start moving north.


Posted by Warren and Lisa Strobel at 3:40 PM No comments: Links to this post

How I think I look at 6AM looking for Warblers...

How I actually look at 6AM looking for warblers...

Posted by Warren and Lisa Strobel at 6:00 AM 2 comments: Links to this post


Do something good for the planet tomorrow! It needs it...

Birdcouple had a VERY conservation-oriented weekend, mixed in with a bit of birding.

On Saturday, we, along with dear friend and guru Paul Baicich, participated in a workshop at Jug Bay Wetlands Sanctuary on strategies for doing more to conserve the birds of Maryland and their habitat.

Lots of great groups were represented, including Ducks Unlimited, the American Bird Conservancy, Maryland/DC Audubon, the Maryland Ornithological Society, Lights Out Baltimore, the Maryland Department of Natural Resources, and others.

It was a great meeting, with good energy and lots of ideas about how to join many disparate efforts. Now time for action!

Of course, we squeezed in a bird walk to look for early migrants, like Ovenbird and Northern Parula. 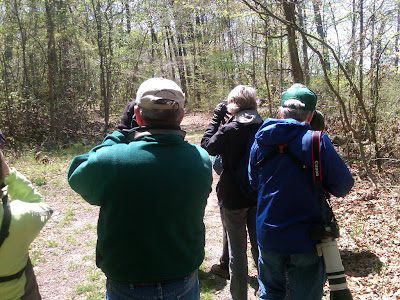 On Sunday, we went with Papa Carl and Grammy Thora for a walk at the Scenic Rivers Land Trust property at Bacon Ridge. This amazing 1,600 acre property, north of Annapolis in the Crownsville area, is an important watershed for the entire city of Annapolis. 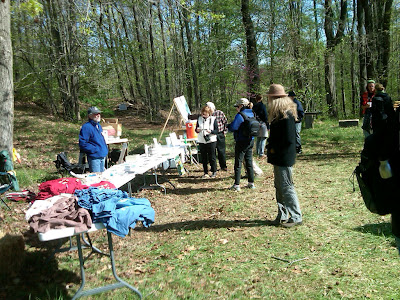 There is Princess, in her uber-sexy hat!!

We saw a beaver damn, a Garter Snake, all sorts of cool insects and larvae, were within a few feet of a singing Northern Parula, and had a fly-over Cooper's Hawk.

Most of all, it was good to see kids out of doors and getting into nature: 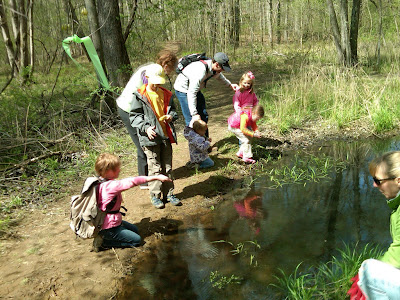 Posted by Warren and Lisa Strobel at 7:00 PM No comments: Links to this post

Posted by Warren and Lisa Strobel at 10:49 AM No comments: Links to this post

... way down in southwest Virginia in the Washington-Jefferson National Forest.  Had some great birds, including a pair of Ruffed Grouse that we flushed, Barred Owl hooting near our shelter at dawn, Blue-Headed Vireos everywhere, and lotsa warblers:  Black-Throated Green, Black and White, Northern Parula and Louisiana Waterthrush.

Princess will blog all about the hike - and the rainstorm at 4000 feet elevation - on BC's AT blog.
Posted by Warren and Lisa Strobel at 11:35 AM No comments: Links to this post

How waiting for the Warblers to show up feels..

Posted by Warren and Lisa Strobel at 9:26 AM No comments: Links to this post

What a difference a year makes 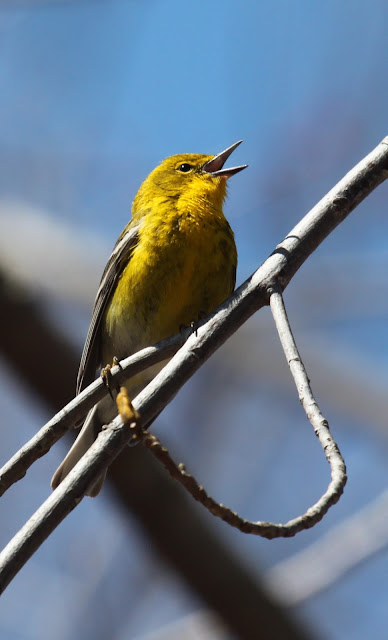 We keep records of bird sightings not just to tally our life, state, year and other lists, but also to keep track of bird populations, their comings and goings, etc.

Migrant birds in our area seem to arrive in a fairly predictable progression - Ospreys, followed by Eastern Phoebes, then Palm and Pine Warblers, Blue-Gray Gnatcatchers, etc. But the phases can vary a fair bit in time.

Last year, for example, by the first of April we had seen Gnatcatchers, a few warblers, and multiple species of Swallows. This year, it's a week later in the year, and those species are just starting to dribble in. Spring has been late a-coming, and those birds aren't dummies - they need insects to eat and warm southerly winds to speed their journey north and save energy.

With all this in mind, Lisa and I went to Flag Ponds Nature Park in Calvert County yesterday to herald the opening of warbler season. With the help of her magic (that is, birdsong on Sibley's iPhone app) we brought in that Pine Warbler above, and this lovely creature: 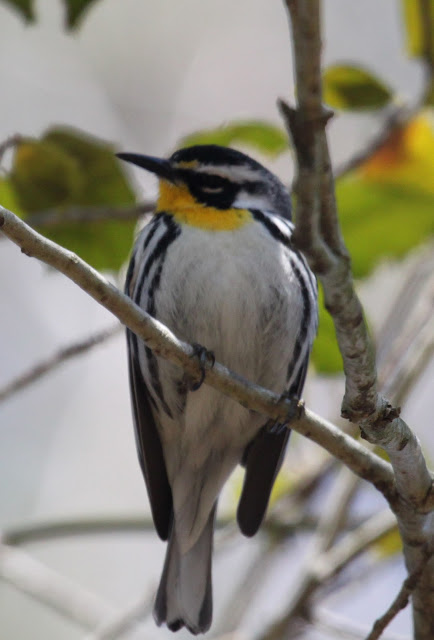 Yellow-Throated Warbler
Posted by Warren and Lisa Strobel at 10:28 AM No comments: Links to this post

How I feel when Cute Husband shows me all the possible

lifers we could get in Panama...

Posted by Warren and Lisa Strobel at 8:09 AM No comments: Links to this post