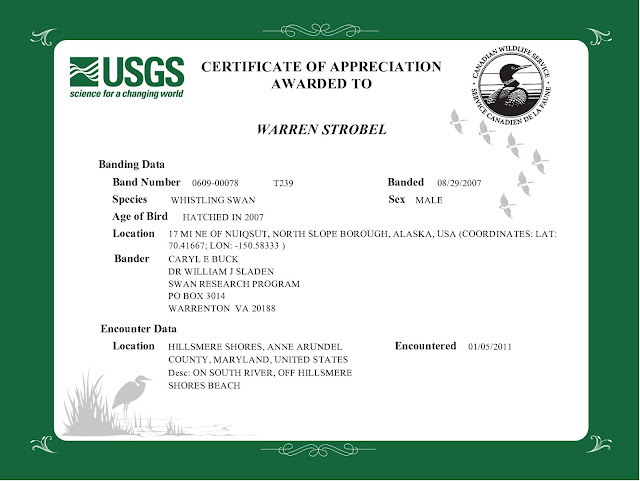 ﻿
A belated Happy Thanksgiving from Birdcouple!  Hope everyone had a wondeful Holiday.
We got this lovely pre-Thanksgiving surprise in the (E-)mail. Back on January 5, 2011, Warren was birding at Hillsmere Beach in Annapolis when he saw a Tundra Swan (described above as a Whistling Swan, actually a subspecies) with a band on its leg. He recorded the number and sent it online.
This certificate shows that the bird was hatched in 2007, and banded on August 29, 2007. It was about 3 1/2 years old when I saw it.
Most cool of all,  the bird was banded up on the North Slope of Alaska. Drop these numbers _ 70.41667, -150.58333 - into Google Maps or some similar program and you'll see what we mean.
That's a LOOOOONG way from Naptown USA!

Posted by Warren and Lisa Strobel at 12:01 PM