Two Whimbrels Survive Storm, only to be shot upon landing in the Guadeloupe... 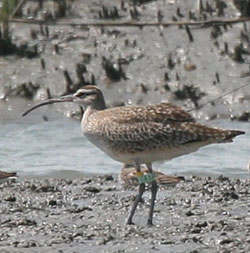 Barry Truitt
This is Machi, a Whimbrel who has been tracked for two years by scientists at the Center for Conservation Biology at the College of William and Mary.

Machi and another Whimbrel (Goshen) made the fatal mistake of landing on the Caribbean island of Guadeloupe, French West Indies after surviving Tropical Storm Maria.   Though Whimbrels (and most other North American birds) are protected in the U.S., Mexico, and Canada by the Migratory Bird Treaty Act it’s legal to hunt them on several Caribbean islands and there are no bag limits.

And, hunting shorebirds during migration and especially after storms is quite popular in the Caribbean.  Hunting in French-owned Guadeloupe and Martiniquen is also mostly recreational and unregulated.

Lisa Sorenson of the Society for the Conservation and Study of Caribbean Birds(SCSCB) says the answer is not to beat up on hunters, but to encourage their governments to adopt sustainable hunting regulations and set aside safe harbors for migrating birds.

I see another opportunity for birders to get involved....

You can help SCSCB's education efforts here.
Posted by Warren and Lisa Strobel at 10:25 AM