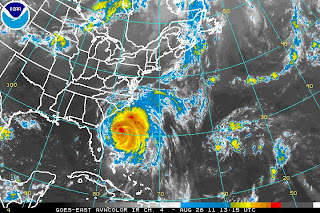 Well, we are hoping that Irene doesn't make a boat necessary to travel around Annapolis, but a few  birds blown in by the storm would be bonus.

There have been some highly unusual birds reported in Maryland after previous hurricanes and the information gathered by birders provides important data about the effects of such storms on birds and their populations.

That said, safety is the highest priority after the passage of hurricanes, and no one should venture out until authorities declare it is safe to do so.   Fallen power lines, flooded roads, falling trees are all hazards, and tornadoes can still pop up after the storm's center has passed.

As you may know, Cute Husband is working on a big Maryland year.

Clearly, I will need to restrain and shackle him up until the coast is clear...

Be safe!
Posted by Warren and Lisa Strobel at 9:22 AM