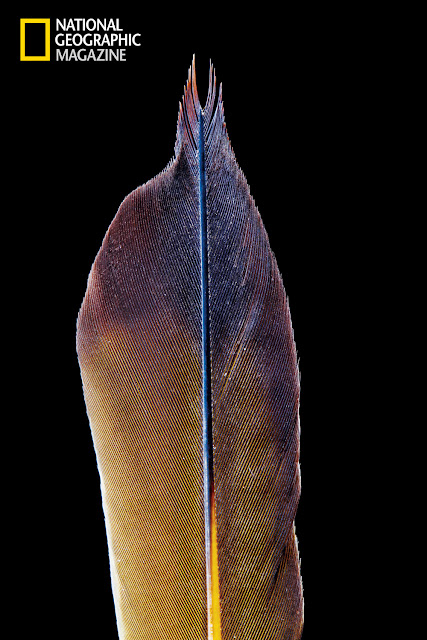 Tail feather, assists in climbing.
Institute of Zoology and Zoological Museum, University of Hamburg
We birders see feathers all the time, but how often do we really stop and think about them? We may notice a few feathers on a bird when we're trying it. Does that chickadee have enough white on its cheek and nape to make it a Black-Capped? Is there any black in that gull's primaries? Could it be an Iceland Gull? And we may notice a pile of feathers on the ground and try to decide what it was that Mr. Cooper's Hawk had for lunch. Tufted Titmouse? Mourning Dove? Sparrow?
But what about feathers themselves? Where did those wonderful devices come from? How do they work? Why do they come in such a dizzying array of shapes, sizes and forms?
Carl Zimmer answers a lot of those questions in the latest issue of National Geographic magazine, in an article illustrated with eye-popping photographs by Robert Clark and art by Xing Lida. 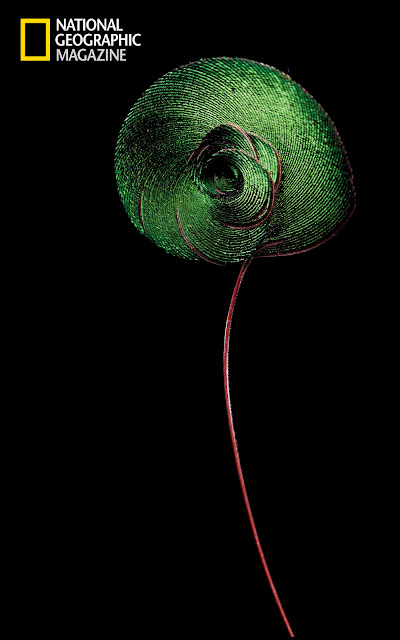 Disk tail-feather tip, wobbles during display.
Courtesy Peter Mullen, Ph.D.
As he traces the evolution of feathers, as scientists now understand it, Zimmer shares some surprising conclusions. Among them: "Scientists now know that feathers evolved long before they were used for flight." They are still struggling to understand how the transition to flight happened. But feathers were probably first  used for insulation, help with running and climbing, and attracting mates. 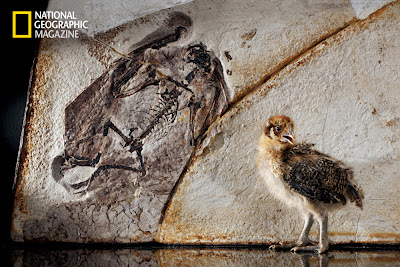 First Came Fuzz
Birds evolved from dinosaurs, but the origin of their feathers may trace back even deeper in time, to the common ancestor of dinosaurs and pterosaurs, like the fossil at left. These flying reptiles were covered with thin filaments that may have looked something like the down on this pheasant chick.
Jeholopterus ningchengensis
168-152 million years ago, China
At Institute of Vertebrate Paleontology and Paleoanthropology, Beijing
The article also tells how new fossil finds have changed our understanding of feathers and dinosuars. It was once thought that feathers were only found on a group of dinosaurs called theropods, to which birds are closely related. But they've now been found on other classes of dinosaurs as well, suggesting a common feathered ancestor far back in time. Paleontologists have even been able to recreate the color of one dinosaur's feathers, thanks to fossilized pigment sacs. Too, too cool.
You can find the full gallery of Robert Clark's photographs right here.  They are in the February 2011 issue of National Geographic magazine, on newsstands January 25. 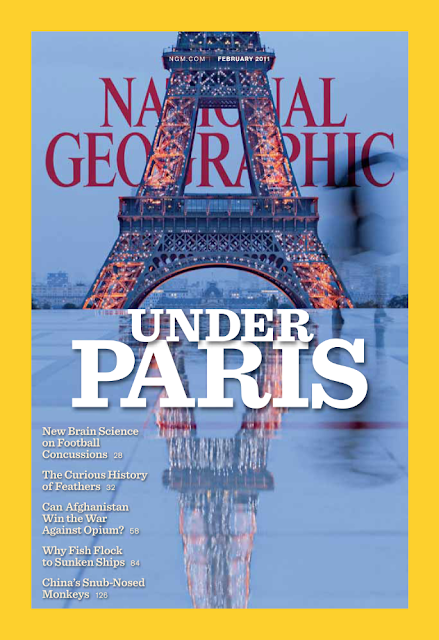 Birdcouple loves this magazine. Warren got Lisa a subscription as a present years ago, and we have been subscribers ever since.
Posted by Warren and Lisa Strobel at 4:44 PM