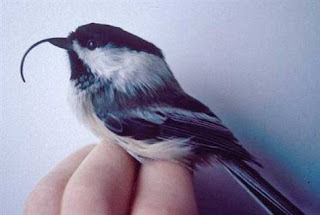 Photo: USGS
Deformed beaks, elongated claws and feather color variations are on the rise in Alaska.
Avian Keratin Disorder, found first in Black-Capped Chickadees,  is showing up in an increasing number of other species including the Northwestern Crow.  The disorder makes foraging and preening difficult, not to mention raising young.
In the past, Avian Keratin Disorder has been associated with environmental pollutants.  Black-Capped Chickadees and Northwestern Crows are mostly permanent residents, but they do not share the same habitat, making finding the cause of the disorder difficult.
In the meantime, it looks like nuthatches and woodpeckers are starting to also be affected.
Oh, sometimes it just makes me want to scream about what we are doing to our planet...
Posted by Warren and Lisa Strobel at 1:00 PM

Oh, I want to scream, and to cry! Doesn't everyone remember the use of canaries in a coal mine? When birds are deforming...I am worried about the birds I love and about the planet and all her people...

Oh no! I had not heard of this and these are the first pictures I have seen! How sad! How disturbing! Is there any hope?

Thanks for the info. We've been seeing this in the Glaucus-wing gulls on the West Coast. The birds I've seen have been 2 years old or younger.