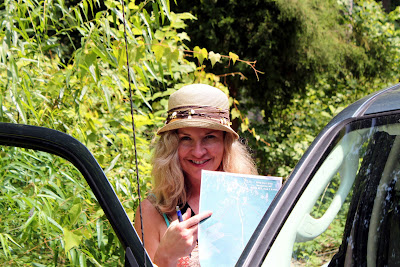 Princess and I went out to Nanjemoy, in rural Charles County, Maryland, last weekend to do our part for Audubon Maryland-DC's 2010 Bird Blitz, helping to identify candidate sites for future Important Bird Areas.

Maps, checklist forms, binoculars and GPS device in hand, we walked along remote (but still too traffic-y) roads for four hours, until the heat and the sun had quieted down all but the most persistent birds. Don't you love that picture up there of Princess Lisa modeling the 2010 season route map, the latest in bird-nerd fashion? Seriously, she's way cute.

Highlights of the morning were calling Prarie and Worm-Eating Warblers, along with a Yellow-Billed Cuckoo and some other goodies. 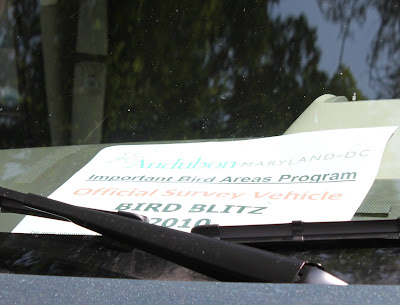 In all seriousness, this is an important program, staffed by volunteers. Last year, Bird Blitz developed some important data that resulted in new IBAs being named. Oops - time to send our data forms in! Gotta run...
Posted by Warren and Lisa Strobel at 9:38 AM

Good for you! Glad to see you doing this!

Um, Lisa? That hat is to die for. Seriously. You go on with your fabulous birdwatching self.