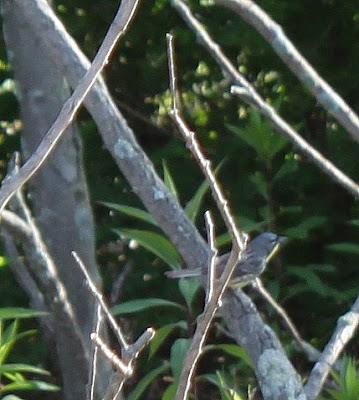 After Princess Lisa's recent events, which Birdcouple is mysteriously terming "The Wilson Incident," BC needed a mental health break and a getaway. As luck would have it, we had already scheduled a 4-day trip to visit Paul Baicich and friend Lisa Rock at their new digs in Ohio, just minutes from the famous Magee Marsh and Black Swamp Bird Observatory.

We rendezvoused with Paul at a gas station a few miles past Port Clinton, Ohio. He had just gotten off his cell phone. The word was in. A Kirtland's Warbler had been spotted on the shores of Lake Erie, a mere 20 minutes away. Oh hope beyond hope - would it still be there? We dropped Paul's groceries, grabbed Lisa R and headed for the spot. After a mere 15 minutes of nail-biting, this rarest of North American breeding warblers appeared, practically trodding on Princess Lisa's shoes. (we know, we know, the photo above, well .. kinda stinks).

Kirtland's Warbler is rarely found in the U.S. outside of Michigan, where its exacting needs for nesting (dense forests of young Jack Pine) and brood parasites like Brown-Headed Cowbird took a heavy toll on this handsome bird. It was down to about 400 birds in 1971, according to the US Fish & Wildlife Service. Today, there may be 5,000 KIWAs in existence.

We felt beyond privileged to see one of the males, no doubt resting during migration as he headed to northern Michigan. And we all laughed in wonder at the first warbler Birdcouple had seen in May during our Ohio adventure: Kirtland's.

More soon on our wonderful time in the amazing birding area of the Lake Erie shore, and the great folks we met there. Like the couple behind the Birds from Behind blog.
Posted by Warren and Lisa Strobel at 8:55 PM

What a great way to start a visit to Magee!
Congrats on the great bird, and sorry about all of the bad puns, well not all of them...

Lisa- so glad things have turned out well enough after "the Wilson event". I hope this was not a reference to wearing black toupees!

Life is too short as it is, so be well and bird hard! It was great to meet you both! Cheryl

COOL - such a beauty! We had one there two weeks ago on our first trip there too. Glad this one stuck around for you.
And in my personal opinion, who cares about a poor photo - the important part is making sure you get good looks. Photos are secondary to the experience.

Awesome..Cant wait to see those Kirklands...
Oh..and you met Weedpicker Cheryl and the couple from Birds from behind...how fun.