Oxbow Lake on an April morning

Happy Easter, everyone! It's a beautiful spring morning here in the mid-Atlantic, and one of the bluebirds that have suddenly begun hanging around just made an appearance. Life is good!
Saturday morning we spent with Paul Baicich at Oxbow Lake Nature Preserve, an incredible oasis in the middle of a suburban community and a stone's throw from major highways like the Baltimore-Washington parkway. Marcy Stutzman, who cares for the trails, the trees and the preserve in general, and knows it perhaps better than anyone else, says more than 160 species of birds have been recorded here. That includes some real Maryland rarities, like Bridled Tern.
It's a beautiful, soothing spot: 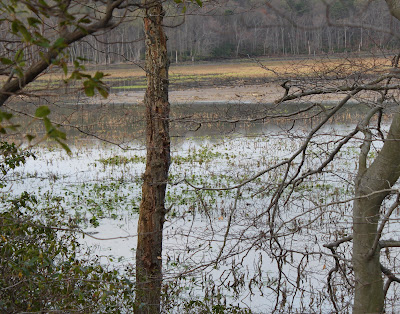 Well, we counted 33 species of birds during our 90-minute visit, comprising an incredible diversity: snipe and other shorebirds; raptors; three species of swallows and Purple Martin; woodland birds like Hermit Thrush and Brown Thrasher; and waterfowl.
Warren was watching some very large "crows" settle on a distant branch when he decided to put a scope on them. Then he asked, Uh, do you ever get Common Ravens here? Marcy and friend Jay answered in the affirmative. And the birds in the scope were indeed Ravens, which are found to our north and west and are a  very uncommon sight in Anne Arundel county.
Minutes later Jay said he thought he'd heard the gobble of a Wild Turkey, and pointed out the distant slope where they are sometimes seen. Warren scoped it and found a single male bird, who quickly wandered away into the forest.
Oxbow is also home to lots of frogs, turtles, snakes and mammals like muskrat, otter and beaver: 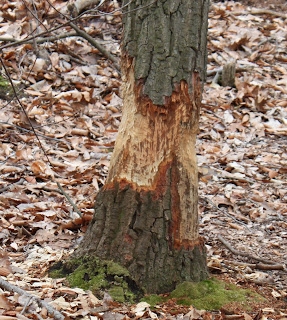 Getting up early in the morning after a late night at Anne Arundel Bird Club, where Paul was the guest speaker, can be hard. But it was worth it! Warren's bird species list for AA County jumped from 200 to 202! 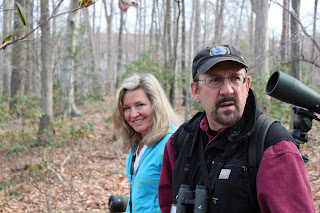 Marcy found a turtle shell, no longer in use by a turtle, that will be used for kids' nature education: 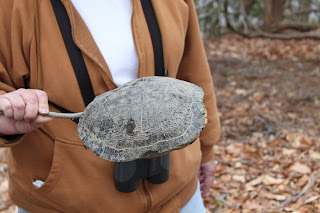 Posted by Warren and Lisa Strobel at 9:41 AM

Great post on the Oxbow Lake Preserve. I have been to Oxbow Lake once and would like to visit again soon. Great photos and congrats on the Raven sighting. I have never seen a Snipe yet.

Eileen - Thanks! There were 8-10 snipe at the Lake yesterday morning, feeding on the mudflats. Hurry over!

Great visit to oxbow..I havent birded that area yet..I know Jeff and I should add it to our list of Birdie spots..
congrats on the two added birds.