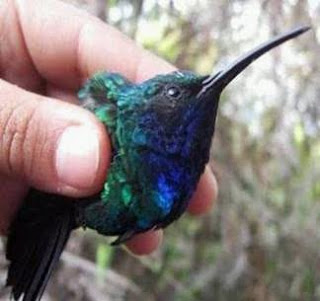 Lots of good stuff for our occasional round-up of birding and nature news, much of it contributed by McClatchy web editor Tish Wells and other friends from McClatchy's Washington bureau. They are constantly sending me bird-related news, or asking me bird questions, which is nice.

That photo up there, taken by Laura Cardenas, is the first photographic evidence of the continued existence of the Santa Marta Sabrewing. The area where it lives in Colombia's Santa Marta Mountains had been slated for development in 2006, but was purchased at the last minute with funding from the American Bird Conservancy, Conservation International and Fundacion Pro Aves, a Colombian organization.


* Nature magazine reports here on how birds' positions in flocks depends on their position in a group hierarchy. Study was done with homing pigeons equipped with GPS devices.

* McClatchy's Miami Herald story on Everglades vultures munching on everything - including car parts.

* More owl video, via The Island Packet, another of McClatchy's 30 daily newspapers.

* Lastly, from Paul Baicich, good news about nabbing bird trappers in Florida.
Posted by Warren and Lisa Strobel at 4:05 PM