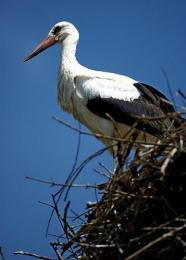 From the Austrian Times...

It's a love story of epic proportions....

When Italian hunters shot a female stork called Malena, local vets in Croatia where the stork had been nesting revealed that, although they had saved her life -- she would never fly again.


She was placed back in her nest with her young and when her partner named Rodan flew south with their young they expected that she would eventually die and certainly never mate again.


But the predictions that she would not live were foiled after the Vokic family, where she had a nest, helped to feed her through the long winter months and now -- amazingly -- every year Rodan returns to mate with his partner and rear another clutch of chicks.

That means that every year Rodan flies 13,000 kilometres to South Africa to spend the winter in the warm and then the same distance back again to be back with his injured love.

A local said: "She was shot in 1993 by Italians - but she didn't die and was handed over to our vet. He saved her life but she was crippled and had lost her ability to fly. The damage was too severe.

"Her lover is amazing - this year when he arrived from South Africa where he spent the winter, and despite the fact that he had travelled 13,000 kilometres, he immediately made love to Malena."

You can read the rest of the story here.

Time to fly on home after a hard day at work, Cute Husband....

Happy Weekend!
Posted by Warren and Lisa Strobel at 3:42 PM