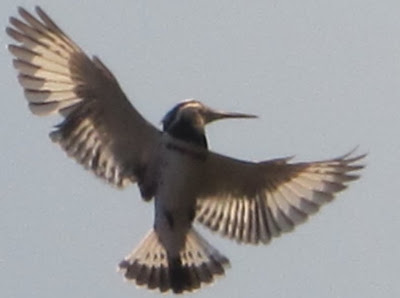 Warren took this picture Tuesday during another walk in Abu Nawas park in downtown Baghdad. This Pied Kingfisher was hovering over a marshy area at the banks of the Tigris River.

W even got to go on a boat ride, because small tour boats have begun operating on the river for the first time in years, a tentative bit of normality in a war-scarred city.

There were a fair number of birds, although most of them unidentified, since W was sans bins: a big heron (Grey Heron or Purple Heron), a white egret near some reeds, lots of White-Cheeked Bulbuls which are frequent around the city, and Great Cormorants. Even saw a bat at another Baghdad park just at dusk.

Ten more days and W will be eating up the wintering East Coast birds. And more importantly, eating up Lisa!
Posted by Warren and Lisa Strobel at 3:10 PM