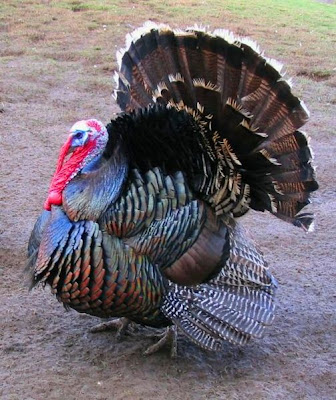 The male Wild Turkey is quite the flirt.

It all starts in late February.

The male (aka the Tom) will gobble to attract a gal and once he gets her attention, he struts his stuff by fanning his tail, raising the feathers on his back, inflating his crop and engorging his facial skin.

That seems to work for the females. Many females, as one Tom will often keep several hens.

Females will build a nest on the ground and deposit 4-17 eggs. She will do all the chick raising, perhaps because the male is exhausted from all his rigorous displaying.

The Wild Turkey is one of our greatest conservation success stories. Hunted almost to extinction in the early 20th century, the Wild Turkey has returned to near abundant status in some locations.

The domesticated turkey that you are most likely enjoying today is a descendant of the Wild Turkey bred specifically for their size, white meat and broad breasts.

Mmmm.... I can almost feel the tryptophan kicking in already....

Happy Thanksgiving!
Posted by Warren and Lisa Strobel at 8:45 AM

Dinner Oh No, run Turkey and hide. Sorry, i just had to say that. I cooked a turkey today and a ham. Happy Thanksgiving and Great birding.