Wherein we share bits of important news and views about the environment and birds...
* In the better late than never category (hey, it's still June, at least on the East Coast of the USA!), here is the June issue of the Birding Community E-Bulletin, chock full of cool stuff like a Greater Sand-Plover seen in Florida; designation of the Chesapeake bay as a "National Treasure" and the potential addition of two species, Horned Grebe and Whip-poor-will, to Canada's list of at-risk species.

* On the subject of at-risk species, the BBC reports that a 30-year study of woodland birds has found catastrophic declines in many species. The Nightingale, which inspired odes from Britain's greatest poets, has declined by 95 percent, virtually vanishing from Britain's woodlands.

* In happier news, the American Bird Conservancy reports that a new effort, undertaken in cooperation with the Colombian organization ProAves, has established a reserve for Niceforo's Wren, one of the world's most endangered species, with less than 25 breeding pairs known to exist. We LIKE the A.B.C.

* Closer to home, and in today's mediocre picture category, Warren arrived back from Iran and discovered that summer had indeed arrived. He went hiking at Cedarville State Forest and, along with seeing and hearing many breeding warbler species, found a few damselflies: 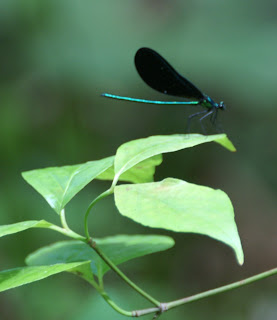 W and L are off this weekend to do our first three-day hike on the Appalachian Trail, doing a bit of New York and finishing off New Jersey!! Somewhere along the way, we will cross the 1/4 mark of doing the whole trail! WOW! More info on BC and the AT here. And the Appalachian Trail Conservancy has a really cool new interactive map on their website....
Posted by Warren and Lisa Strobel at 8:15 PM

Have a great time on the AT.
Too bad its wont fit in with our CT birdie outing
http://dawnandjeffsblog.blogspot.com/2009/06/birders-who-blog-tweet-and-chirp-outing_30.html