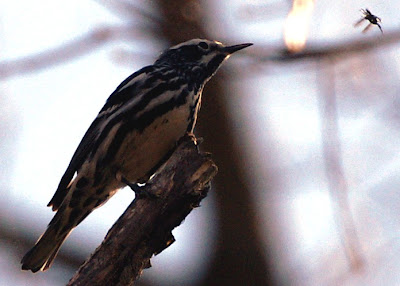 Warren took this photo of a Black-and-White Warbler on Sunday while Birdcouple was enjoying the annual "Walk for the Woods" at South River Greenway in Crownsville, Md., part of the Scenic Rivers Land Trust. Our group was ably led by Dan Haas.

We'd heard a few Black-and-White Warblers singing their squeaky wheel song during the morning, but they proved frustratingly elusive, at least to Warren's old eyes. Finally, we had a very cooperative chap show up, and it stood still on a small snag for quite a while. Warren snapped away. It wasn't until Birdcouple got home that we realized why the bird had been so cooperative: it had its eyes on a bug breakfast! Cool!

(Full disclosure: the original pic was woefully under-exposed. This has been touched up with a photo-editing program).

The next day, while Princess Lisa was happily working in her garden, Warren made a detour on his way home from Adam's soccer game. Dan H, who is on top of all Annapolis birding info, had spotted a Blue-Headed Vireo at Truxtun Park. Sure enough, it was there: 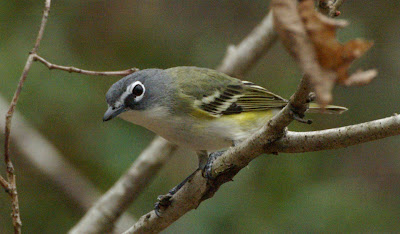 So were some beautiful Palm Warblers... 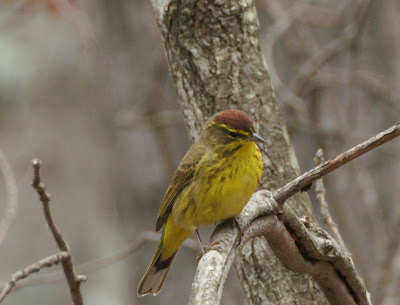 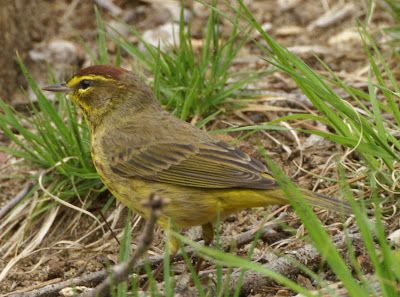 ... and a lot of other birds. We've said it before, but it's amazing how a tiny amount of habitat -- the wild area at Truxtun Park is maybe a couple of acres - can attract so much birdlife.

Thanks Dan, and sorry about the Barred Owl thing. Really.

Posted by Warren and Lisa Strobel at 8:12 PM

That's quite a good photo! I saw my first black-and-white warblers this weekend down in Cape May. I had almost forgotten their song since last spring.

John - thanks! Have a great spring migration up there in NJ...
W and L

That is a great looking bug..the increbulous yummieific is a rather tasty morsel no wonder the black and white was after it.
Looks like the birdies are migrating your way.
I just looked at the radar map that David laPuma posted http://www.rap.ucar.edu/weather/radar/nids/images/BREF1/KDIX/20090422_003704_black.png
I am sure you know of this already..but in case you dont.
http://birdcapemay.org/bfma

Nice shots! I'm ever so jealous of the warbler sightings. I'd even welcome a trip to High Island Texas (where I would certainly be eaten alive my mosquitoes) - just to see 22 species of Warbler as a friend of mine recently reported!

It can be so hard to get close to these birds-isn't it great when they decide to give you a break once in a while and pose so that you can get a nice photo like that?

Great image...I truly enjoy the insect that being eyeballed. In Montana, we only have Black-and-White Warblers at the very eastern edge of the state, only a 600 mile drive for me.