We blogged a couple of years ago about the Large-Billed Reed Warbler, arguably one of the world's rarest birds. It was first discovered in 1867 in India, but then lost to science for 139 years, until it was "refound" in Thailand in 2007.

Since that time, there have been increasing, but still infrequent, reports of the bird in several locations, most of them in India.

Here's one of those locations: 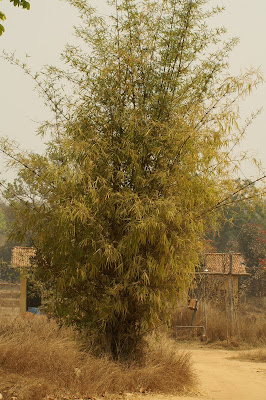 This is at a lodge a few kilometers outside Kanha Tiger Reserve, where we spent 2 1/2 days with our dear friends Peter and Kimberly Kaestner. Being in the vicinity, we couldn't help but stop by on the off-chance that this rare bird might be there.

But we were overjoyed to hear that Peter, who has one of the biggest birdlists in the world, *did* see the bird a few weeks after we left India, at an entirely different location, 65 kilometers SSE of Calcutta. Amazing, but not suprising, if you know Peter.

Here's what the elusive Large-Billed Reed Warbler looks like: 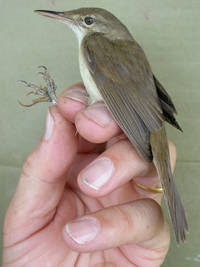 Posted by Warren and Lisa Strobel at 7:45 AM

What a pretty bird.

But not as pretty as our own North American wood-warblers!!

Thats some large bill for a little birdie..Sorry you didnt get to see it!