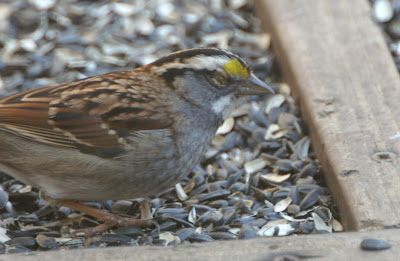 Birdcouple hates sights like this. After participating Sunday morning in the annual Patuxent River Waterbird Count - and snagging a cool male Barrow's Goldeneye spotted by another team - we headed up to one of our favorite spots in southern Maryland, Battle Creek Cypress Swamp.

There, we planned to check out their always-active feeders, and take a walk on the boardwalk through one of the northernmost stands of bald cypress trees in the United States.

While Lisa checked out an observation bee hive, I sat at the window in the nature center and snapped pictures of all manner of birds. It was not until we got home and took a closer look that we realized this White-Throated Sparrow has conjunctivitis, a highly contagious bacterial infection better known as House Finch Disease.

We blogged about this almost a year ago, when we had an afflicted goldfinch show up at our home feeder. But we thought the disease was limited to House Finches, American Goldfinches and closely related species. Not so. This scientific paper (it's a PDF file) based on the Cornell Lab's House Finch Disease Survey, found that the disease was reported in 31 species other than House Finches. Of those other cases, three-quarters were in American Goldfinches, Purple Finches and House Sparrows.

But there were a smattering of cases in species such as Cedar Waxwing, Northern Shrike (!) and, yes, White-Throated Sparrow.

So a reminder to all: Please clean those feeders!!
Posted by Warren and Lisa Strobel at 6:10 PM

Wow, I thought it only occured in finches also.

This is another reason to keep those feeders clean folks.

I just cleaned all mine and do so every month in the winter. I would hate to have something that devestating started from my feeding station.

Thanks to you both. I was so surprised when I pulled this picture up to full size - and surprised to learn the disease isn't limited to finches.

We felt yucky when we had that Goldfinch at our feeder last year with a bad case of this - even if the infection didn't come from our feeder. Washed everything out right away.

Very interesting. I didn;t know that this effected so many species.

This is interesting, but not to surprising if an infection like this starts to cross species lines. I always thought that perhaps the house finch was more susceptible to the disease because of the smaller gene pool found in the Eastern US. Due to the way they were initially introduced to the east.
You might recall when West Nile virus first showed up around here they we collecting only Crows and related species that were infected. Since then the virus has branched out to others and us at the local Health Department stopped collecting the birds.

Albert - very interesting points. Many thanks.

I've just recently found out about finches and conjunctivitis and think I've seen a few in my yard in the past with a strange looking eye. So now I see other birds are affected at times by it too.

That is a shame..I have had one goldfinch with eye disease...

We found out we had to clean all our feeders right away when this happened to one of our visitors, as the disease is highly contagious... Sadly (and with reference to my Princess's post today), these birds are at greater risk from predators due to their reduced eyesight...