Our House and the White House

Apparently, Cute Husband and I have something in common with the new first family. 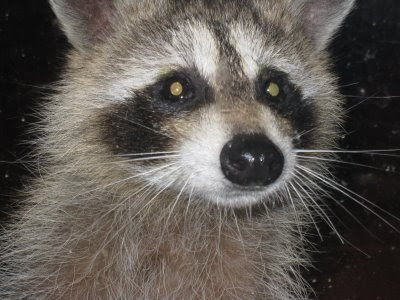 The LoveNest is constantly under attack by a family of raccoons who enjoy tipping the trash, eating bird seed and washing their cute little critter hands in the bird bath.

And, according to this from The Washington Post, it looks like the White House is having similar issues with everyone's favorite neighborhood varmite....

A small band of masked intruders has broken into the secure White House grounds and has evaded capture by agents of the new Obama administration, officials said today.

The National Park Service is in pursuit of one very large raccoon and several medium-sized raccoons, who have been spotted roaming the grounds around the Executive Mansion and the West Wing...

So far, the raccoons have evaded capture despite the presence of several "live traps," which are essentially cages with a one-way doors to keep the animals inside.

Hopefully, not for release in LoveNest territory.

Happy Friday!
Posted by Warren and Lisa Strobel at 4:32 PM

very cute picture. they are cute until they are wrestling my dogs or killing my chickens!

do you guys drop rabies vaccine bait for the raccoons? we have had a really high incidence of rabies with raccoons here and spread the vaccine every year with DNR.

Five years ago every 2nd raccoon (dead) we sent for testing was positive. Both Shawn and our neighbor had to get the rabies series after coming in contact with dogs that tangoed with suspected rabid raccoons. apparently feels like fire going in your butt : 0

Hmmm... I think I speak for both of us, but Warren and I would not like to experience anything like fire going up the butt.

Wow! Thanks for the info and we will check out the vaccine with DNR.

These small animals are so cute looking hard to think of them as vermin needing trapping and disposal.

Yes, I can get a little mad at the raccoons robbing our feeders, but only a LITTLE mad. :)