While Lisa was being the marvelous daughter that she is, visting her dad in the hospital Saturday, Warren kept up the BC quest by doing a spot of birding up at Fort McHenry up in Baltimore, which is actually quite a birdy spot.

Warren didn't expect to see the Snowy Owl that had been reported there a few days ago - at the least the third in Maryland this winter - and didn't. There were some nice ducks in the Patapsco River, but after a frigid hour, he headed off to Oxbow Lake Nature Preserve on his way to meet Princess at home for dinner.

After checking out some lovely Northern Pintails and Hooded Mergs, Warren continued along the lakeside path, when he heard the rustling of a fairly large mammal in the brush nearby. A closer inspection revealed a beaver, which took its sweet time moving away, allowing for a really nice photo opportunity.... 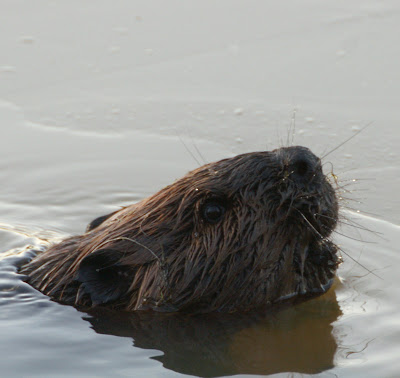 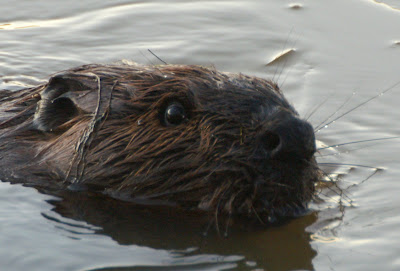 Here she is slapping the thin sheen of ice on the lake with her paws: 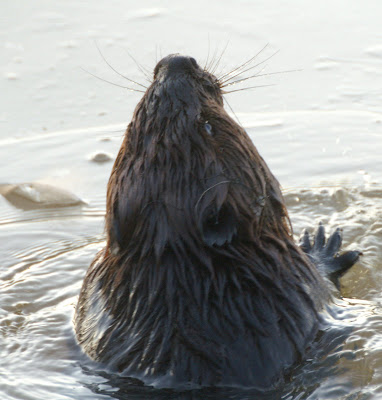 No sooner had Warren gone back down the path and put his camera back in the backpack where he had dropped it, than he heard another large rustling sound behind him. 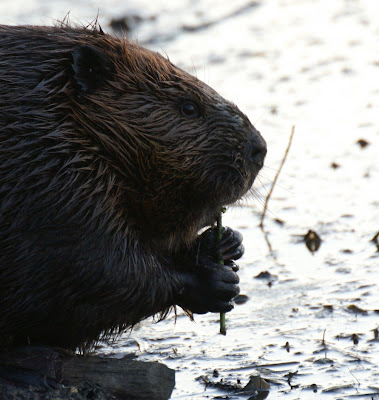 Papa beaver. The trained journalist, observer and nature-watcher in Warren was more than a bit embarassed to realize he had nearly missed the second half of BeaverCouple!!

Incredibly, papa beaver sat there chewing on a stem for several minutes, allowing me to take more pictures from no more than six or eight feet away.

He was watching me, however: 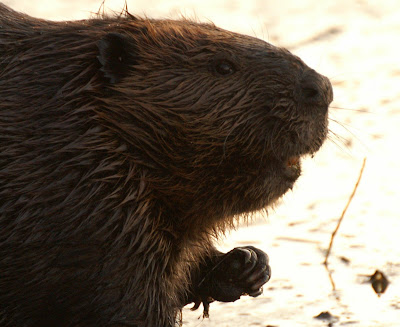 Finally, Mr. Beaver had had enough, and made for the water: 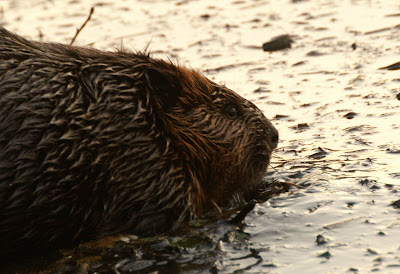 Checking me out again: 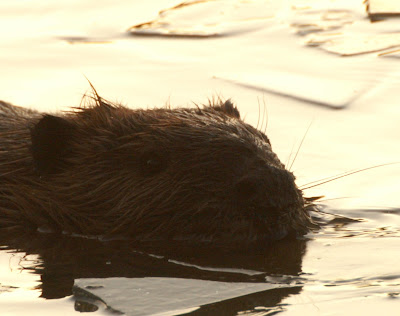 Putting on the Ice Hat: 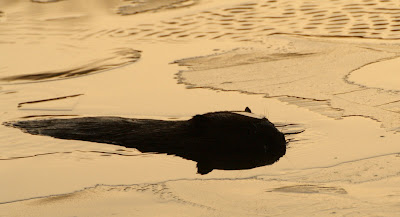 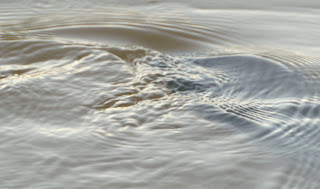 I figured the beavers must have been groggy and hungry, having just woken up from hibernation. But after spending five minutes on the Web, I learned that beavers DO NOT hibernate.
My new theory for why this pair didn't slip away at the first sight of me like beavers normally do is that they were quite hungry, gnawing on shoots that may have just sprouted as the days lengthen and start to warm a bit, and they didn't want to be disturbed.
Thanks for the show, BeaverCouple.
Posted by Warren and Lisa Strobel at 12:45 PM

I cannot believe your luck. I just found a beaver dam at the river I frequent and have been trying to get a look at them.

Thanks! Really was just pure dumb luck. Good luck with your beaver dam.

You captured some great photos. I loved seeing the critters this close up...wow.

What a wonderful experience for all of you! These are some great shots and the detail is stunning! Beavers are so cute!

Great photos-Jerry Mathers would be proud of you! During my last encounter with a beaver it kept slapping its tail against the water as if to say get the heck out of here!

Larry - there was definitely a little tail-slapping going on here, too - once the beavers got in the water. I was just surprised how long they stayed on the lake bank, allowing me to take pix to my heart's content.

All the best
Warren & Lisa