We came, we saw, we birded 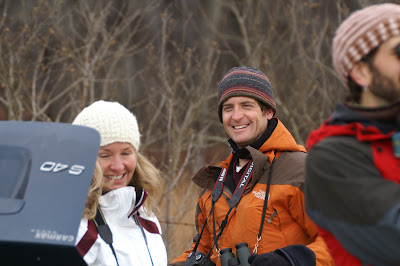 Some days are just treasures. Sunday was one. We started out early (well 9 a.m., which is actually kind of late for birders), doing a bird survey at the Organic Dairy Farm in nearby Gambrills. It's a lovely property, one of the largest undeveloped tracts in northern Anne Arundel County. A parcel is going to be turned into a low-impact park. Our job, along with friends from the Anne Arundel Bird Club, was to conduct a bird survey.
Lisa and Dan Haas were happy. And they hadn't even started birding yet. Mike had started birding. Everyone was in a good mood. Except for Cow 428: 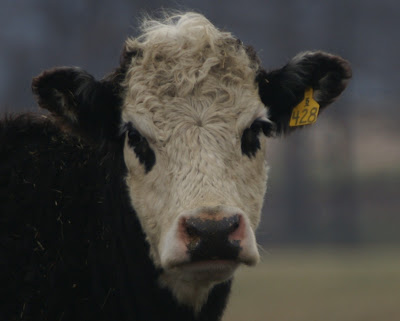 Mostly thanks to Dan and Mike, we had some great finds, including White-Crowned Sparrow, Purple Finch, Horned Larks, a flyover Pine Siskin and much more. The farm is the only place in Anne Arundel county where I have found some species of birds, including Horned Lark, Bobolink and Cattle Egret.
After nearly three hours of birding, we grabbed some snacks at the nearby organic supermarket (yum!), then we were off to Lisa's folks to help with a few chores. And then? And then we made a mad dash to Cambridge, Maryland (about 60 miles south and east), where a rare Tufted Duck awaited us. Interestingly, Christopher over at Picus Blog just got his life Tufted Duck, too.
The Tufted Duck is a Eurasian bird, very rarely seen in North America. Plus, a Barrow's Goldeneye, which very rarely comes this far south, was being seen at Cambridge. PLUS, a Eurasian Wigeon. How could we not go?! With this Star Wars-bar scene-of ducks, who knows what else we might see?
Go we did. Your intrepid narrators here, went two for three, easily finding the Tufted Duck with the aid of other birders in the vicinity. The weather was lousy and the water choppy, so this is the best photo I could get. You can see the tuft of feathers pretty clearly: 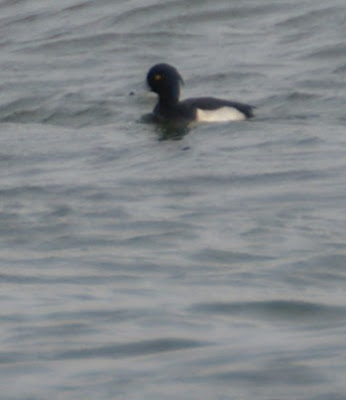 Warren found the Eurasian Wigeon almost by accident, huddling up against a rockwall at the water's edge. The Barrow's Goldeneye was alas not to be. It had left, and we left, too, very happy campers, and were home in time for supper.
A few more photos from the day: 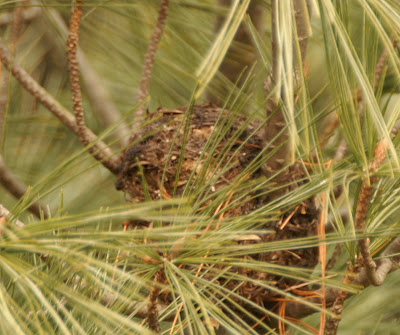 Mike, who knows a lot about these things, thinks this might be a goldfinch's nest. 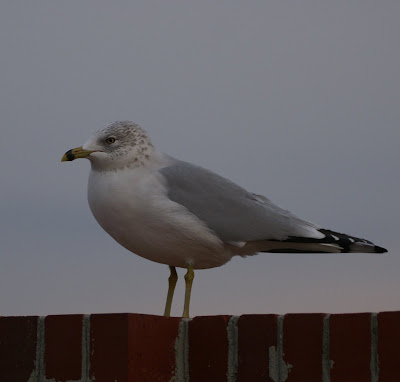 Ring-Billed Gull, looking kind of handsome in the cold. (The photographer was in the car taking this shot).
A closer look: 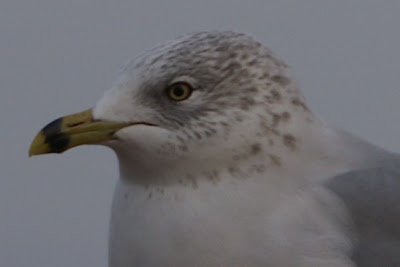 Good birding to all!
Posted by Warren and Lisa Strobel at 11:06 PM

I sure look happy. The photo didn't lie... I was. It's always a great time birding with THE Bird Couple. Mikey was great to entertain and educate us the entire morning.

I'm sorry I missed the meal at the Organic Market. But, I did manage to completely cover my wife's ride in organic farm mud (which I still need to address by a quick trip to the car wash).

Until the next time...

What a nice birdie day you had...how fun to bird with Nervous birder and wife...did he sing you a tune?
Organic supermarket sounds good too.
that tufted duck is delightful...i have never heard of one and now will be on the lookout for it.