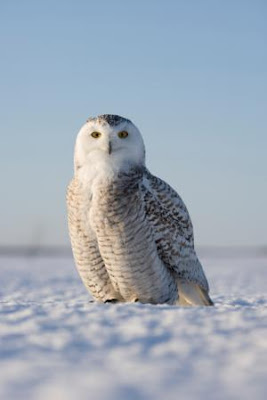 Cute Husband and I made a recent trek to Assateague Island National Seashore to get a glimpse of the Snowy Owl that has been hanging out South of its normal winter range.

And, this past week, it seems another Snowy showed up on the same beach joining the juvenile male we spotted.

ScienceDaily has a recent press release about the discovery of several Snowy Owls hunting on the Artic Sea ice.

Again, way out of its normal winter range.

So, why are Harry Potter's owls showing up in odd places this year?

Well, just yesterday I thought it was because of a crash in the lemming population up North which forced the owls to search for food outside their normal range.

Apparently, the reason we are seeing so many Snowys heading South this year is because the lemming population this summer in their breeding range was explosive. Lemmings so abundant that Snowys had little trouble raising their young. Young birds that are now moving outward searching for hunting territory.

Posted by Warren and Lisa Strobel at 10:46 AM

How exciting! I would love to see a Snowy Owl.
I guess there's not much chance of seeing one in Florida.
We just arrived here today and will go out and see the local birdies soon.
Great blog and info!

Dawn - Good luck in Florida! Let us know what you see!!
W and L