Fox Sparrow on a Winter's Day 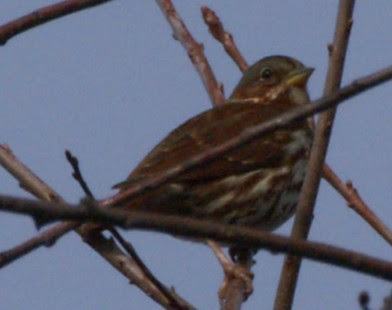 Paul Baicich and I took one of our occasional walks this morning around two of Columbia's lakes (Elkhorn and Centennial) in Howard County. These walks are one-fourth birding, one-fourth catching up between friends, one-fourth talking about birds and conservation, and one-fourth exercise. I think we put in more than four miles!

The birding wasn't great - not huge amounts of waterfowl in yet. But we had beautiful looks at male Hooded Mergansers, some cute Ruddy Ducks, and a pair of (apparently) mated Red-Shouldered Hawks.

I have never gone birding without learning something new (we always learn loads from Paul) from observing bird behavior and trying to identify species. No matter how mundane, there's always some treat--and the treat often shows up toward the end of the outing, just when you think it's going to be a bird-bust. Not sure why that is.

Anyway, today's treat was this Fox Sparrow, perched -- and posing for me! -- high in a tree (rather than flitting in the brush, where they are often found). Lisa and I love this handsome sparrow, which can be quite uncommon. This is only the second we've seen this year, with as few as a dozen or so lifetime sightings.

P.S. - Here is a bit more on the Fox Sparrow from the Cornell Lab.
Posted by Warren and Lisa Strobel at 5:28 PM