Hmmm... what to do on a day when you've got a nasty little tummy bug for the second day running? Go birding!! What do you do when you do a bit of local birding, and there's nothing much to be found (no offense to Cardinals and Mockingbirds)?? GO CHASING!!

So it was that Paul Baicich and Warren, feeling more than a wee bit under the weather since the weekend, found ourselves en route to West Virginia. We were looking for perfect White-Cheeked Pintail territory. 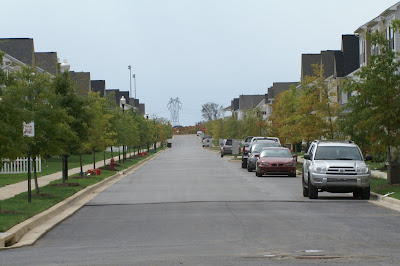 This is a little development just south of Charles Town, West Virginia, a lovely little place really, where the inhabitants are quite friendly and the streets well-paved. Not exactly a place you'd look for a rare bird, however. Yet a White-Cheeked Pintail was here somewhere. We knew it ... we sensed it ... we felt it...

... thanks to a posting on the Internet.

White-Cheeked Pintail is a bird of the Bahamas, the Caribbean and South America, one that occasionally shows up on the shores of Florida and Texas as a stray. Yet here it was a in a muddy little drainage pond in West Virginia. A really handsome, good-looking bird: 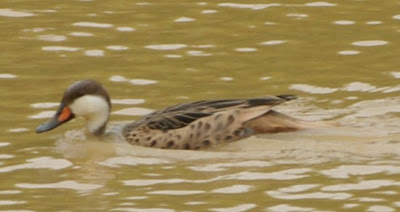 Isn't he or she a beaut? Love that white cheek-patch, brown cap, red/orange at the base of the bill, and the warm brown flight feathers. 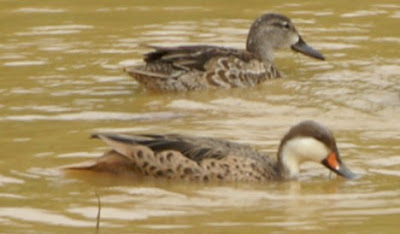 The Pintail, which we found within 60 seconds of getting out of Paul's car, was hanging out with some Northern Shovelers, and this female Blue-Winged Teal.

This is a really rare bird in North America, as we might have mentioned previously. Or should we say, it is a really rare WILD bird in North America. It is so pretty, it is part of many a private wildfowl collection, and not a few aviarys and zoos. And so, while we would like to believe that this is truly a wild bird blown off course by one of our recent hurricanes, the chances are it is an escapee from a zoo or some other owner.

There have been a few reports of wild birds accepted in Florida, and one in Texas. But other sightings, especially those along the East Coast, are assumed to be escapees. So we cannot, for now, count this rarity on our life lists. But we don't care. It's a beautiful specimen, wherever it came from.

And, of course, Paul and I saw more. Including these two Pectoral Sandpipers. 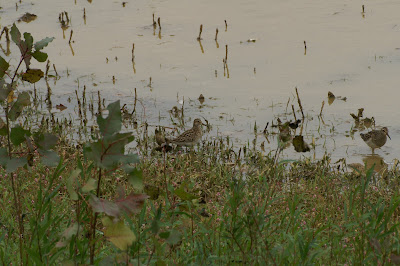 Can't see them very well? How about this? 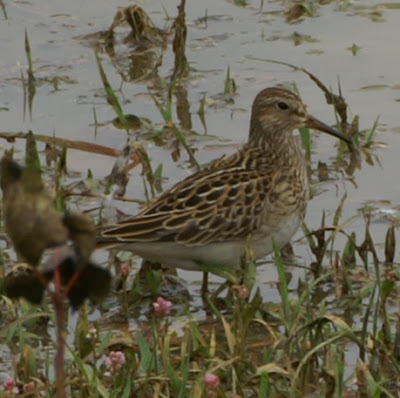 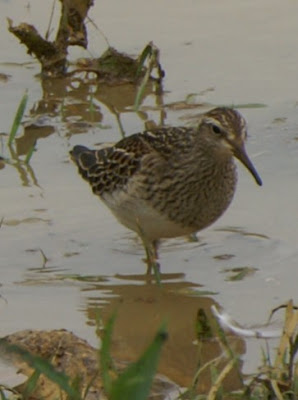 THAT's a pretty bird, too. Even Turkey Vultures have their good sides: 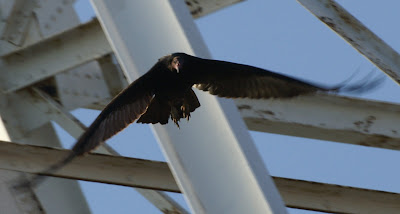 Good Birding all! Warren is feeling better already...
Posted by Warren and Lisa Strobel at 6:48 PM

As Warren writes, there are many records of the duck on the East coast - and elsewhere! Besides over two dozen reports for Florida and one juicy one for Texas, we found references for... Alabama, California, Illinois, Louisiana, Nevada, New Jersey, North Dakota, Delaware, Virginia, Wisconsin, Ontario, and Québec!

I can remember a White-cheeked Pintail at Burke Lake, in Northern Virginia, about 10 years ago... after the tail end of a hurricane. Was it legit? Were any of these many other state/province reports legit? We may never know.

Anyhow, it was fun seeing the West Virginia bird...