It's that time of year. The wood warblers (and other passerines) that made our spring as they rushed up from the Caribbean and Central America, all decked out in their finest Easter clothes, to find a bride and procreate, are headed south again.


Now their plumage looks a little worn, and it is sometimes a little harder to tell them apart. We won't see them again = except for a few birds silly enough to try to over-winter here = until late April and early May.

Their passage south is good news, however. It means they - or their parents - survived the brutal migration northward, made it through predators, human development and pollution, survived the competition of territory and mating, found enough to eat, and are now carrying on the great rythym of the year. Safe travels, dudes!


Here's one of the simplest, but prettiest, of the 30-odd warbler species in Eastern North America, the Yellow Warbler. We photographed it on April 20, 2008 at Bombay Hook National Wildlife Refuge, Delaware. 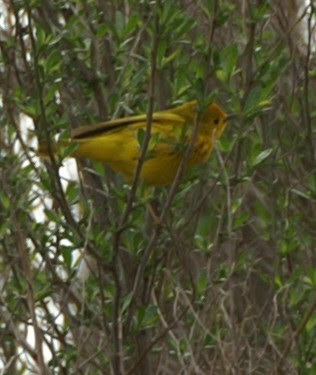 Posted by Warren and Lisa Strobel at 7:59 PM

For me, fall represents both a hello and a goodbye to warblers, since I generally do not see many during the summer. Plus it marks the arrival (in the mid-Atlantic) of the yellow-rumped warblers.

We feel sort of the same way! The only time we see warblers in mid-summer, generally, is when we're up hiking on the Appalachian Trail, where some of them are nesting at the higher elevation, even in "southern" areas like PA, MD and VA. Southern compared to the boreal forests, that is....

I haven't seen many fall warblers yet.-One day I came across a redstart, black and white, and a Northern Waterthrush.-Mostly I've been searching fro shorebirds and hawks.-I'll definitely be searching for warblers this weekend.

I've been seeing a warbler or two a day for the last few weeks. They are so hard to identify in the fall!

They ARE hard to identify. I'm still struggling to learn fall warblers. Like anything else, it takes practice. If you can learn just 2 or 3, it helps you focus in on the others....