When do you count a bird?

Before today's essay, here's an update from some of our favorite fellow birding blogs:

Birdchick has been out at the ABA National convention, looking for ABA life bird #500. ... Dan Haas is out this morning helping clean up the Severn River and environs. He is keeping close watch on the Peregrine Falcons that have returned to the Severn Rive bridge. .... John from DC Birding Blog makes his first visit to Cape May County, NJ, as a birder! He also passes on some sobering news about the state of Magellanic Penguins, and the fact that one California Condor chick has been killed in the big fires out in California. ... Larry from Brownstone Birding Blog has been searching for flycatchers and suffering (like the rest of us!) through miserable summer humidity....

So, now to today's question. When does a birder get to count or "tick" off a news species as part of his/her lifelist? Is just hearing its call OK? (American Birding Association rules say, yes). What about just getting a tiny glimpse of it? What about seeing the bird, but having someone else who knows the species -- a field trip leader, say - clinch the identification? Did you see the bird good enough so I can count it? goes the old joke.

What threshold do you have cross to say you have "experienced" the bird? It's a very personal question, in some ways. Your life list, after all, is your own, no one else's. Lisa and I confronted this question yesterday, after tromping through hot, muggy, insect-ridden fields for several hours at mid-day in nearby Calvert County. The birding wasn't bad at all, but our real target was a Barn Owl - a lifer for both of us - that inhabits a barn at a location we shall keep secret.

We approached the barn quietly, or so we thought, but the moment we entered, a large silent form exited the other end of the barn. I merely saw some shadow moving. Lisa got a slightly better look at the bird from behind, enough to confirm it was an owl. We followed outside. Wrens and other birds were mobbing something (no doubt the owl) up in the tree, chattering like crazy. We looked all around. No owl. We returned to the barn and waited for 15 minutes. There were owl feathers, owl droppings and signs of owl's dinner. But no Barn Owl.

As 4 p.m. approached, we had to leave, and started the hike back to our car. Did we count the owl as "seen"?? No, we didn't. I don't think anyone would have criticized us if we had. And I had no doubt we were in the presence of said owl. But we can't really say that we saw the bird well enough to make a conclusive identification. It didn't call or screech in any way. As disappointing as it was, we'd rather not add this magnificent hunter to our life list until we get a real good look at him.

Which is another way of saying, we'll be heading back to that barn soon.

We'll close with a few pix that illustrate how summer is in full swing here in the mid-Atlantic. Indigo Buntings were singing everywhere yesterday. This one flew to investigate when we played his song with our National Geographic Handheld Birds gizmo. 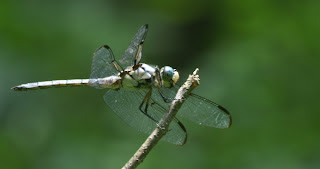 I'm just not too hot on dragongly identifications. And there were LOTS and lots of dragonflies all around us yesterday. Probably some species never before seen by man.... 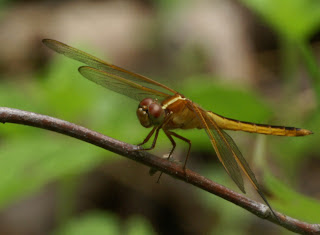 And finally, a male Box Turtle crossed our path.
Posted by Warren and Lisa Strobel at 8:08 AM

I'll count a bird if I see or hear enough to identify it myself. For most species I prefer to get a look, but I will make an exception for birds like rails and owls that are very hard to see or that have very distinctive vocalizations. For some birds, like empids, the call is more diagnostic than the plumage, so it doesn't make sense to me to wait to see it before listing it. But everyone has their own standards.