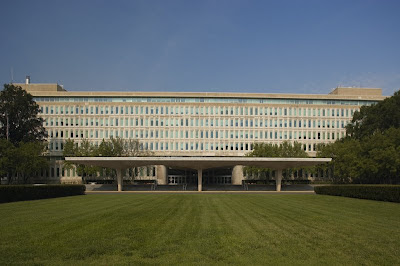 My job, covering foreign affairs and occasionally national security for McClatchy Newspapers, sometimes takes me to very interesting places where I get to do quick bits of birding in place most people never get to go.

My Iraq bird list, for example, stands at two: House Sparrow and Mesopotamian Crow, a subspecies of the Hooded Crow which is likely to someday be recognized as its own seperate species. (Since the Iraq War, I've been there twice, on quick in-and-out trips with Secretary of State Condoleezza Rice and Colin Powell, but not as a war correspondent. I was in Iraq four times before the war began, when Saddam was still in power, but that's a different story).

Today, my job took me to the CIA headquarters in Langley, Virginia .... for reasons I am not at liberty to describe here. The campus is actually a large tract of land (albeit heavily protected) with lots of leafy trees and even running trails for employees.

While I couldn't exactly mosey around, when I left the Original Headquarters Building (picture above, courtesy of the agency's public website) and walked to my car, I figured it couldn't hurt to put my eyes and ears in birding mode. Sure enough, I heard a Blue Jay's call not far away. So there it is, I've started my CIA bird list. I'll head back soon with bins and scope. NOT.

Posted by Warren and Lisa Strobel at 7:55 PM