Louis in the Yard

Our pal, Louis, who is recovering from surgery on an over-used knee, helped me inspect the bees this weekend.

Louis captured some lovely pictures of the girls in action along with some mouth watering images of the capped honey. 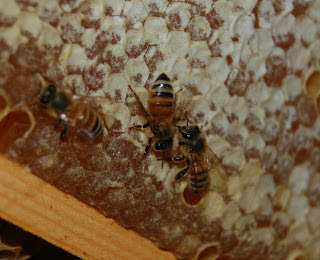 This is the Athena hive that overwintered successfully and hit the ground running this spring. She looks like she has one full super full of excess honey that I plan to harvest this weekend. 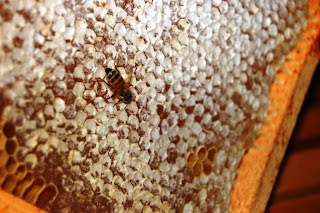 The honey looks perfect, but I am concerned about the general lack of bees in Athena. I know they swarmed at least once, but I'm not sure if the new queen is actually laying.

I made the mistake (one of several thousand) of adding a full size super (rather than a smaller, more manageable one), which they promptly filled.

It now weighs about 70lbs.

I hope to get more of an idea of what is going on in the lower 3 supers once we (yes! me and you - Cute Husband!) wrestle this top super away from the hive. 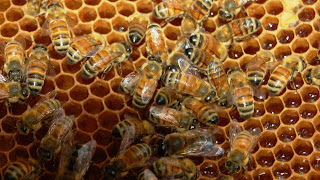 This is a picture of the Diana hive. I am also concerned about her.

There were numerous bees, but not much honey. This is Diana's first summer, so I hadn't planned on taking any honey from her, but I may need to feed her to ensure she has enough to make it through the winter.

After Louis checked out the honey bees, the Shutterbug moved to the front yard to capture these images. 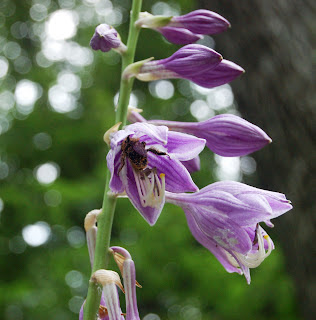 Bumblebee (I think) covered in pollen deep in the blooms of a non-native plant -Hosta. Daylily.
In our yard.
Great, Louis.... More beautiful pictures of the invasive species that Cute Husband and I are cultivating in the yard. 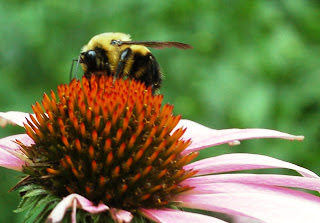 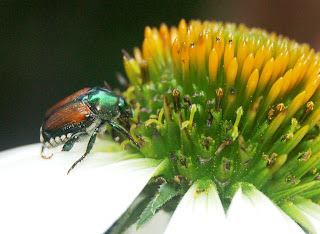 Louis even made a Japanese Beetle look beautiful. Louis, you are hired!

Just keep the photos focused on all the native stuff we planted this year... 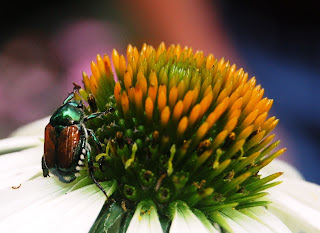 I wonder if I could teach these beetles to attack the Yellow Jackets? It could be a war of the garden pests....

Yellow Jacket update: As of 6AM this morning, still pounding on the top of the glass bowl looking for an escape. Ugh! I'm starting to feel really sorry for them....
Posted by Warren and Lisa Strobel at 3:05 PM