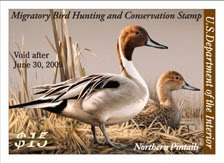 OK campers, listen up! Today is the day that the "Duck Stamp," formally known as the Migratory Bird Hunting and Conservation Stamp, goes on sale.

Are you a birder? Then you need NEED NEED to buy one. Now.

Why? This ain't just the hunters' stamp folks. It's our stamp, too.

That sucker up there pays to buy millions of acres of land for conservation. Without it, large portions of your favorite National Wildlife Refuges--in some cases upwards of 90%--wouldn't be there. And if you're a real birder, you've been to lots of NWRs.

Since it debuted in 1934, the stamp has raised $670 million and preserved 5.2 million acres of wetland, according to the US Fish & Wildlife Service.

You can buy the Duck Stamp at most major U.S. Post Offices, at large outfitting stores like Bass Pro Shops, or via Duckstamp.com (this site was down for maintenance when I checked it).

More here from Jim Williams in the Minneapolis Star-Tribune.

And here is an editorial in the Shreveport, La., Times.

(Both columns passed on to us by Paul Baicich, who else? Wow Paul, maybe people still do need to read newspapers).

So go get your stamp - and a bunch for friends and fellow birders. Any questions?
Posted by Warren and Lisa Strobel at 7:02 AM

Wow, Cute Husband, you must have been super pumped about Duck Stamp Day to get up this early and post :)