Given where BirdCouple lives, and the fact that Warren's father, Carl, is a retired U.S. naval officer, we are just a wee bit partial to the U.S. Navy to begin with.

So we know, Army, Marine Corps or Air Force wouldn't have done this for a bird: 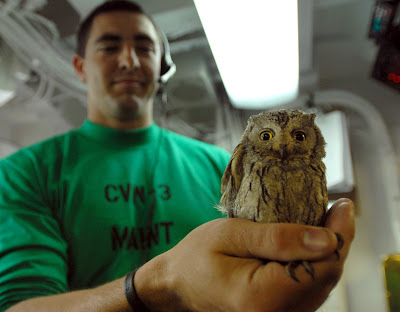 Here's the photo caption the Navy released with this picture:

Good thing for the pilot, the F-18 and the owl that the bird was discovered before take-off.

We don't expect the Navy to be bird identification specialists - so we'll point out that folks who have seen this picture say it is probably some species of Scops Owl, not a screech owl.

Posted by Warren and Lisa Strobel at 5:39 PM

It's one cute little bird!

That is one heckuva cute owl.I doubt he knew that he was going to be enlisted in the Navy.