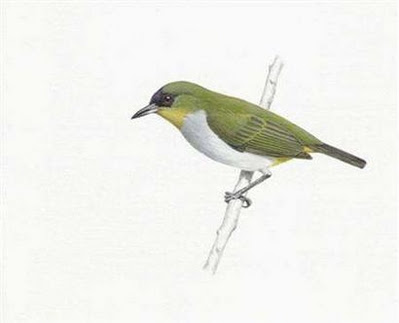 This is the Togian White-eye. (We know, the illustration shows no white eye-ring, but who said bird names ever made sense?) It was discovered a few years ago, and recently confirmed, on a handful of remote islands in Indonesia. Indonesia has about 1,600 of the world's 10,000 bird species. Let's go there, kids!!

More on the discovery here.

While we're on the subject of world birding, let's check in on some of our favorite listers.

Those folks doing "The Biggest Twitch" are at the halfway point in their quest to break the single-year record of bird species seen in a year. It stands at 3,662. They have seen 1,835 species in 2008 so far. Good luck Alan and Ruth.

Posted by Warren and Lisa Strobel at 5:01 PM

I'm gaining fast on that Kaestner fellow.-I must have added at least three species this year! I'll have to read about that new bird.I thought it was some kind of a vireo.