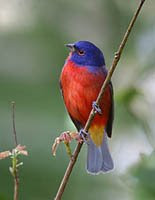 Well, after six attempts (Warren), a dozen or so (Lisa) and just one (Adam), we finally saw the beautiful adult male Painted Bunting that lost its bearings and has been hanging around Annapolis since before Christmas.

Oddly, it (and we assume this is the same bird) visited feeders at two different houses perhaps three miles apart, both of which had large stands of bamboo nearby.

The Painted Bunting, is a beautful, if sometimes shy bird, and the looks we got were nothing like the photograph on the left. Nope, our PABU hid in some dense holly (perhaps being put off by the dozen or so birders and scopes arrayed like a battery of guns on it) and we only found it with the help of those with scopes.

Dan Haas has some great photos on his blog of the Anne Arundel County PABU itself. (Sorry you Shrike-d out on the Northern Shrike at Cromwell Valley, Dan.)

The bunting has been seen lately at a house near the Baltimore & Annapolis Trail.

Having tried so long and hard for the bird (including some chilly December mornings just before Christmas), we decided to be satisfied, and went off to run some miles on the B&A Trail. In fact, we ran back past the spot where our fellow birders were waiting patiently for better looks at Mr. PABU!

I was thinking about this later in the weekend as I read the last 50 pages of Life of the Skies by Jonathen Rosen. He tells the story of making plans to try to go find the Ivory-Billed Woodpecker, shortly after its "rediscovery" in Arkansas. Planning to go with him are two friends, Andy and Rob, both passionate birders.

He writes that Andy "like me ... birds in the spaces his life allows--between children and marriage and teaching and writing and all the obligations of midlife." Rob, on the other hand, "seems to do his work and his living in the spaces that birding allows."

As our PABU experience shows, we are passionate birders (we tried repeatedly before the bird before finally seeing it, a life bird!), but more like Andy. Maybe later in life, we will be more like Rob.

On the other hand, as Adam and I were puffing up and down the trail, we were still birding. We saw a huge Red-Shouldered Hawk in a branch of a tree, not five feet off the trail, looking hungrily into the field below.

Posted by Warren and Lisa Strobel at 6:44 PM