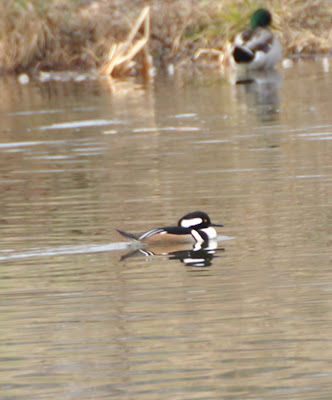 Lisa and I spent a lovely Saturday morning birding spots in Prince George's County, including a lovely place near the University of Maryland called Lake Artemesia. There's always some action there...


Apparently this Hooded Merganser was hoping so, too. When we first saw him, he was cruising down the pond, trying to look all sleek and calm. Well, things changed fast when three female Hooded Merg cuties popped into the bar - I mean, pond. Our little friend here turned around and headed toward the nearest babe, looking more like this: 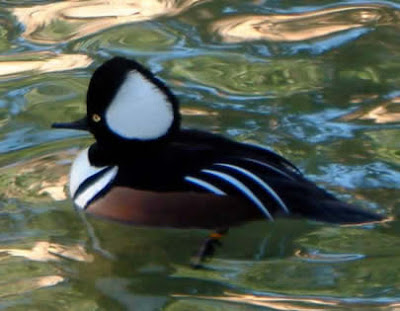 Photo couretsy of Abilene, Texas zoo
According to the Smithsonian National Zoological Park's website, Hooded Merganser "male courtship behavior involves a number of elaborate displays featuring the erectile crest and distinctive vocalizations. One of the most common is the "Head-Throw". A male raises his crest and swims parallel to a female. He throws his head back sharply until it touches his back and then brings it forward slowly while emitting a rolling frog-like croak. Other ritual displays include wing flapping and stretching, shaking, or pumping the head. The female may bob or pump her head in response to the male's overtures."
Well. We'll stop right there, because BirdCouple is a family blog. Suffice to say (and unlike BirdCouple!) Hooded Mergansers do not bond for life. Pairing ends once the female starts incubating her eggs.
And our friend may not have gotten lucky yesterday. A few minutes later, we saw the three girls fly and land in another part of the pond.
Whether it's looking for love or finding food, it's a jungle out there. This American Coot found something green and yummy to eat, but soon found himself attracting other hungry Coots. Lisa said they are not a particularly attractive-looking bird. She's right (as usual). They can even look sort of fierce viewed head-on. 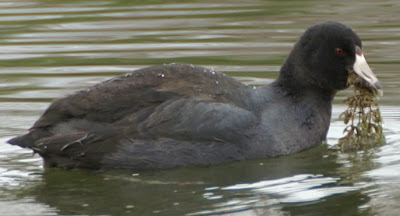 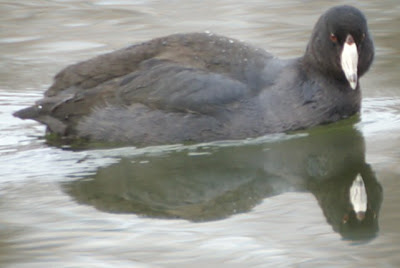 Posted by Warren and Lisa Strobel at 11:41 AM

Nice photos and good information-More people should be reading this blog!

Thank you, Larry! You are too kind...