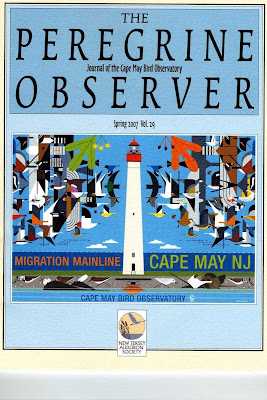 BirdCouple headed to the Jersey Shore to shoot up as many birds as possible as they make their journeys South.

The place to experience fall migration on the East Coast. 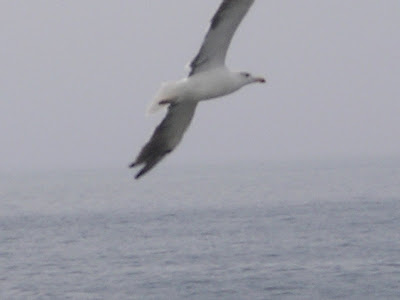 We love the Ferry! There is always the possibility to catch some offshore birds or something migrating over.

Besides, BirdCouple prefers to travel in style. And, at this point of the trip, we can still actually get into the car without maps, water bottles, yesterday's lunch, the day before's coffee, twelve bird guides and all our clothes falling out of the car door.

Upon our landing in Cape May, we headed straight to the Cape May Bird Observatory to check out the recent sightings.

I got all awestruck and tongue tied.

Cute Husband calmly took me by the hand and led me out the door to .... 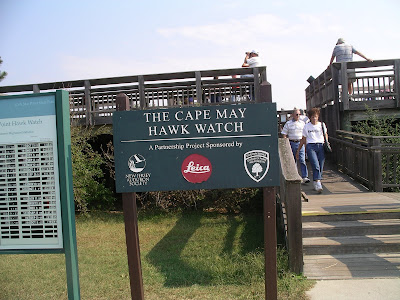 Birds don't migrate because the temperature is dropping. They migrate to follow or find food sources.

The temperatures were crazy high for October in Cape May. We spent an amazing afternoon in shorts in the sun watching Peregrines, Merlins, Cooper's and Sharp-shinned Hawks cross the sky. A look through the scope showed literally 100s of birds in the distance traveling South.

The whole experience would have been so BirdCouple romantic if we had the place to ourselves... 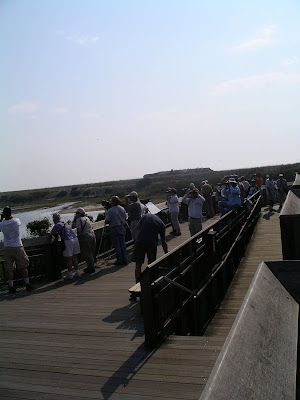 This is the scene from the deck.

Birders galore and birds galore above. It was actually quite wonderful. It was also nice to see some younger birders who really knew their Accipters and such. Plus, getting so many continuous looks at hawks and falcons was a great learning experience. 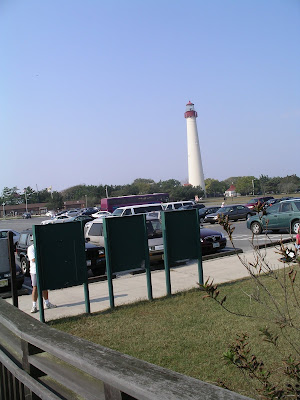 Birder's cars and Cape May Lighthouse.


We joined the Cape May Bird Observatory (CMBO) bird walk the next morning at the Cape May Migratory Bird Refuge. The walk was led by Don Freiday, Director of Birding Programs and Pete Dunne joined the party! 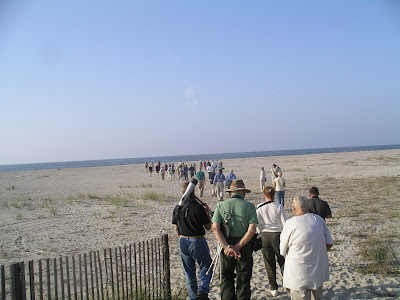 That's Pete Dunne! The guy with the scope over his shoulder!

We learned mounds from Don and his crew. If you are in Cape May, a CMBO walk is a must.

On the beach we caught Northern Gannet and a Parasitic Jaeger and Black Skimmers sailing above the waves.

Northern Flickers were everywhere on the Cape. Flickers in North America are the yellow-shafted form.

I found this on the beach and Cute Husband promptly identified its previous owner by the yellow shaft.

I verified with Pete Dunne.
About this time I was itching to get my photo with Mr. Dunne.

Luckily, Cute Husband reminded me that this would be beyond geeky... even in Birders' Paradise. 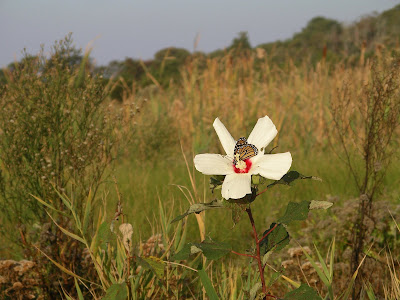 Birds weren't the only creatures in full blown migration. Monarch butterflies were everywhere! 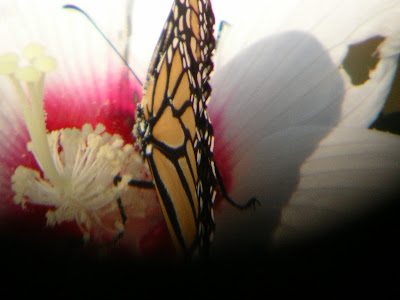 My first attempt at digiscoping. All other attempts were not so pretty. 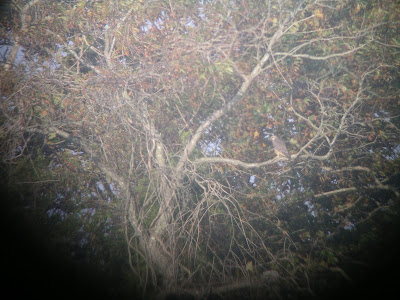 The main reason we were in Cape May this weekend was to meet up with Frank Caruso .

Frank, Professor of Plant Pathology at University of Mass Amherst, fellow birder and all around great time.

We met at Brigantine (Edwin B. Forsythe National Wildlife Refuge).

The purchase of your Duck Stamp at work! 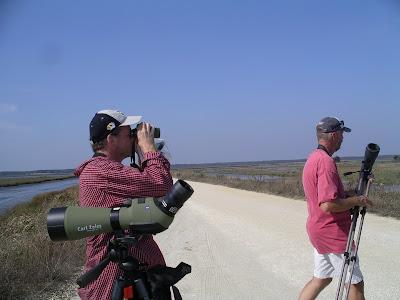 Back at Cape May. Next day. Hawk Watching. 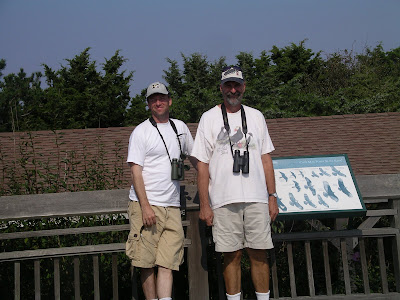 We searched Two Mile Landing outside of Wildwood for American Golden Plover.

We did see dolphin.

We did get bitten by a million evil flies. 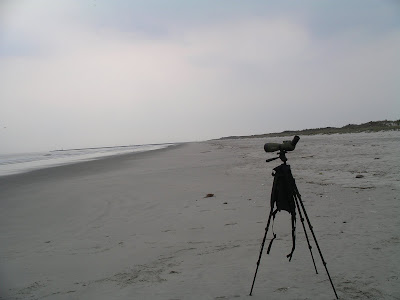 Off to the inlet at Wildwood in hopes of Red Knot. 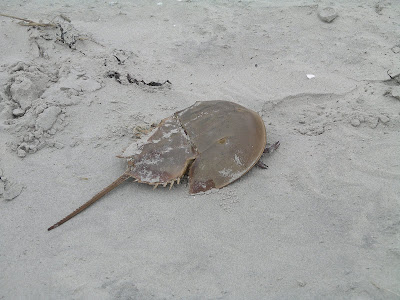 The Red Knot makes an incredible 18,000 mile roundtrip journey each year from its winter home at the tip of South America to the Arctic and back again.

Red Knots only stop a few times on the way to refuel. One critical stop is the Delaware Bay, where they feast on horseshoe crab eggs. Since the early 1990's horseshoe crabs have been commercially harvested. And, as commercial harvesting increased, the number of Red Knots who reached their Artic breeding grounds and successfully reproduced dramatically declined.

In 2003, some projections showed that at their current rate of decline the American subspecies might go extinct as early as 2010.
We spotted a group of 50 Red Knot offshore in their winter clothes.

Our elation at seeing these long distance migrants for the first time was tempered by thoughts of what may become of them. 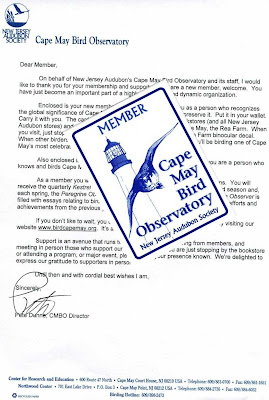 We also became official members of the Cape May Bird Observatory so that they can send us stuff and torture us with all the cool stuff happening in Cape May that we are missing.
Note that Pete Dunne signed our welcome letter.
Ok, ok... this is a form letter for all new members. 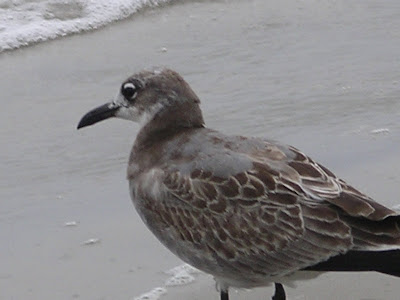 Twenty minutes until the ferry sailed. Twenty minutes of birding at the Beanery.
As we walked to the car a Peregrine flew over followed by a Merlin.
Sigh.
Posted by Warren and Lisa Strobel at 9:11 PM

It was such a joy to read about your trip and look at the gorgeous pictures. We're glad that you had a wonderful time!

GG & Rhodo: Hope you two are well. We were sorry not to hike with you 2 last time, but we'll find a time!