Governor Schwarzennegger signed a bill this weekend that will ban hunting big game with lead bullets in several California counties.


Lead stays in the blood for only about two weeks and then it gets deposited in the brain and other internal organs. Lead can make a mess of the reproductive and nervous systems and at high levels, cause death.


Ravens, eagles, vultures, California Condors and other scavengers ingest lead bullet fragments as they dine on carcasses and gut piles left behind after hunting season.


Biologist Bryan Bedrosian is now collecting bear, wolf and coyote carcasses to begin looking for lead contamination in those animals.


The contamination could be avoided by using alternatives such as copper bullets, which are readily available, although more expensive.


And, according to Bedrosian, "As a hunter myself who has switched, I haven’t noticed any change in hunting success. The only change I’ve noticed is that I’m eating lead-free meat.”

Plus, because lead is a big old toxic heavy metal, the less that is added to the food chain or dropped in fragile ecosystems the better. 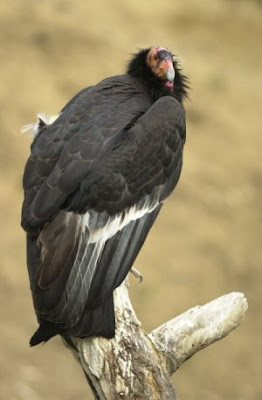 California Condor, "Thanks Arnie!"
Posted by Warren and Lisa Strobel at 8:15 PM

Arnold is doing a few things right.I wish that the Republican party as a whole would take more interest in the enviroment and protection of animals.