Sightings that were all just too far for a quick lunch time or pre-work search. Cute Husband and I were far too busy with the work thing this week.

So... when I saw on mdosprey that Dan Haas, savior of the Severn River Peregrine Falcons, had been called to retrieve a Common Nighthawk from a neighborhood lawn down the street from work, I sent him an email begging him to let me see.

Nighthawks are rarely seen during the day. They hunt at dawn and dusk and lay flat camouflaged on tree limbs during the day. A Nighthawk sitting on a lawn in the middle of the day is just not right.

Dan hoped to take the bird to a safer cat-free location and release. He was kind enough to let me join in the adventure.

Dan showed up with the treasure in a box at Annapolis High School in hopes that the bird would take off and start hunting under the stadium lights. 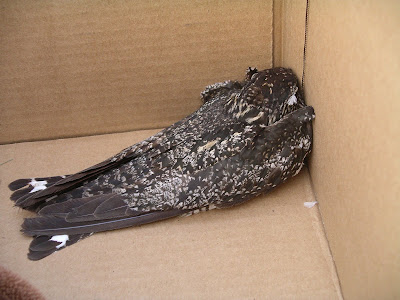 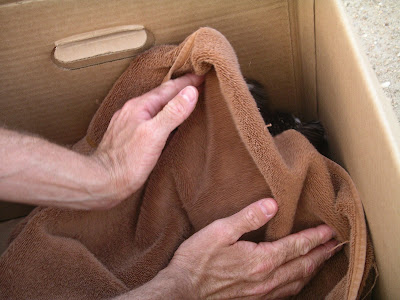 On the first release the Nighthawk flew for about 100 yards but never achieved an altitude of more than 4 feet. 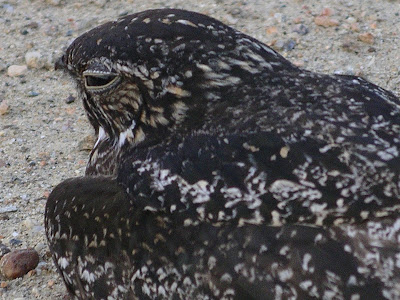 Beautiful bird, isn't he?
Nighthawks are classified in the Caprimulgidae family, or goatsucker in Latin. Goat-herders in ancient Greece saw Nighthawks hunt for insects open-mouthed around their livestock and believed the birds came out at dark to drink milk from the mammals' teats. 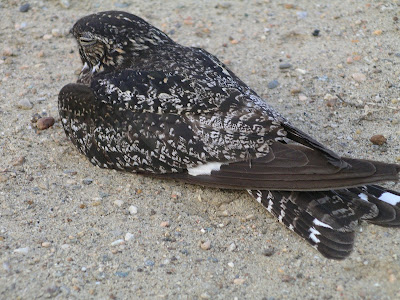 Note the long pointed wings. Nighthawks flight is swooping and moth-like which enables them to catch insects on the fly. 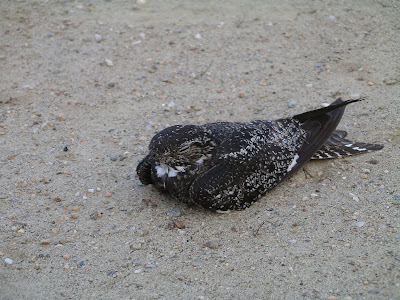 This guy just didn't seem interested in joining the dozens of Chimney Swifts that hunted above us.
As it grew darker, Dan resigned himself to a trip to Tri-State Bird Rescue in Newark, DE. 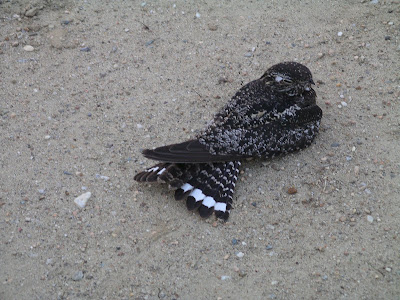 As Dan approached with the towel, the Nighthawk flew again, but he still appeared unable to gain altitude and dropped in the middle of a dark field.
Dan and I searched the field like CSI investigators for some time without relocating him. Dan returned at daybreak on Saturday and found nothing. We both take this as a good sign.
Dan has some great pictures here (plus some of the American Golden Plover he spied Friday morning)
Be sure to read Dan's previous post which details his efforts in saving yet another Peregrine that collided (along with many other birds) into a building in Lanham, Maryland.
Dan is one of the good guys. And, he is also quickly becoming the go-to guy in the Annapolis area for bird rescue.
Thanks for all that you are doing Dan!
Warren and I joined Paul Baicich yesterday morning for a float trip down the Patuxent River and met another good guy that has done some amazing stuff at the Patuxent River Park.
More to follow....
P.S. - "Bullbat" is a southern U.S. nickname for the Nighthawk.

Posted by Warren and Lisa Strobel at 8:16 AM

What an adventure! We sure do hope that the beautiful nighthawk flew to safety once again.

Thanks for keeping such a wonderful blog to educate us all!

I love the blog! Great details and fun to read. So well written, I feel like I was actually there!

Warren, it was nice to finally meet you this morning. I'll look forward to my bird couple taking a hike / trip with the original BIRDCOUPLE.