I can't help it.
Sometimes when I am faced with something like the scene below, I shut down. 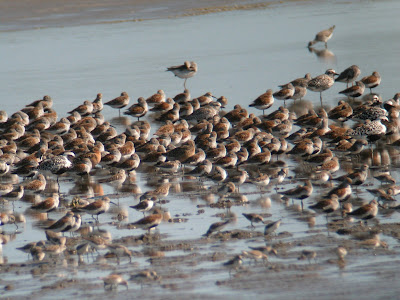 Defiantly a few different species mixed in the bunch. Potentially a life bird in the crowd.

And all I can do is hold my binoculars to my eyes and say to Cute Husband, "Look at that bird, Honey, he's tucking his bill behind him and taking a nap."

Not, "Honey! (I would say this no matter what) Look at the bright rufus patches on that Short-billed Dowitcher. He must still be in his breeding plumage."

No, I am just simply overwhelmed by so many birds in one place. And, after not seeing shorebirds for quite some time, I am also overwhelmed by the foreign-ness of a new set of birds brought to us by fall migration.

I just started nailing the warblers I knew like the back of my hand this time last year.

So, I have my binoculars out and I can't even start to process if what I am looking at has yellow legs or an upturned bill or if the streaking on the breast ends abruptly at the belly.

I'm just looking at a mess load of birds.

It takes me awhile to look at the group for some diversity.

Give me a conspicuous bird. The odd bird something that stands out and I can scream to the heavens, "Why, that is a Pileated Woodpecker!"

Or give me my well known feathered friends who, if I care to impress my non-birding buddies, I will say, "That bird is called a Red-winged Blackbird."

It takes me a while to start to examine.

Not my guy. Warren is immediately processing.

Warren taught me all I know about birds and teaches me something new each day.

We were at Bombay Hook NWR last weekend and the list of recent sighting included a Wilson's Phalarope.

Oh, that would be super cool!

We checked out Sibley's Field Guide. Wilson's Phalaropes have an unusual feeding pattern; they spin in circles to draw prey to the surface.

A couple of minutes after I pointed out the bird that was napping, Warren said in his confident voice, "I see them! Three of them!"

Yes, three of them in the middle of hundreds of Dowitchers, Yellowlegs, Avocets and Black-necked Stilts.

And what were they doing? Spinning in circles. No other birds were feeding in the same manner.

Aha! Look for the birds doing something different from the rest!

And, together, Warren and I have also had the opportunity to learn from other birders.

Like the time we went to Bombay Hook NWR with Peter Kaestner. Peter is so gracious, he always wants to help us get a lifer or a year bird on each visit.

After he got over his initial shock that we had not yet seen a Pipit, (AKA non-existent bird) as he had spotted 6 on his way over to our house, he started searching madly for a Lesser Blacked-Backed Gull for addition to our list.

We told him that they, also, simply do not exist. We had studied thousands of Great Black-backed Gulls in Maryland looking for yellow legs. Those yellow legs would tell us that this gull was not a Greater (with pink legs) but the elusive Lesser. There were simply no yellow legged gulls like that in our area.

Perhaps they are extinct in our region.

So, he took us to a field with thousands of gulls. He patiently pointed out the gull that looked exactly like the Greater, however he was much smaller. This gull was about the same size as the Herring Gull he was hanging with.

So, the lesson here?

The text, along with the pictures, make field guides good things to carry along.

Birding with someone who has seen over 8,000 birds is very helpful.

Birding with a cute, funny, interesting guy is a definite plus.

If the birds aren't cooperating, you are still ensured a good time.

Posted by Warren and Lisa Strobel at 5:32 PM

Yes I am amazed at how easy an experienced birder can make things look.-I think you said the simple truth-The more you bird-the more you learn-that's all that matters.

I'm gonna have to go birding with you two sometime in the near future. That way I can be the most overwhelmed one and you two can school me on what's what.