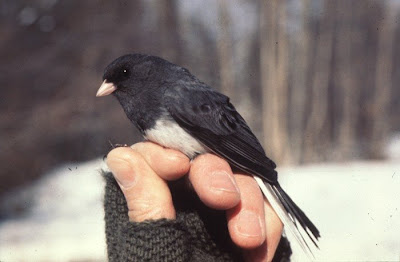 Long time, no blog. BirdCouple has been busy, busy, busy! (Seeing our first ever Wilson’s Phalarope among other things!)

Warren is posting this from Sharm El Sheikh, Egypt, where he is travelling with Secretary of State Condoleezza Rice in the Middle East. He’ll also touch down in Saudi Arabia, Israel and the Palestinian territories before heading home in four days.

But, back to the birds…

This is a thought for the dog days of July. And also an illustration of one of the reasons I really love birding: there is always something more to learn.

Even the most casual backyard birder is familiar with the “snowbird,” those little chappies with the slate-gray coat, white breast and pinkish bill (that’s on the U.S. East Coast—there are subspecies with different plumages elsewhere in the U.S.) They are called Dark-Eyed Juncos. They appear at suburban bird feeders late each year (hence, the terms “snowbirds”) and disappear in the spring.

They all head north once the weather warms.

Well, that’s what we thought we knew. We were wrong.

Lisa and I were hiking earlier this month in the Appalachian Mountains in Georgia – Georgia! – and saw a small flock of birds down by a stream. You guessed it – Dark-Eyed Juncos. Although this is not exactly a rare bird we’ve never seen before, it took us a few moments to convince ourselves of the evidence right before our eyes. Dark-eyed Juncos. In Georgia. In July.

We figured that they must be some kind of rogue, isolated population, marooned down there while the rest of their bretheren were cooling their heels up in Canada. Quite a discovery!

Then we took a closer look at the population distribution map for Dark-Eyed Juncos in our Sibley’s bird guide. There it was – a pencil-thin line of purple stretching down the Appalachian Mountains all the way to Georgia. (Purple denotes where the bird can be found year-round). Apparently, there is an Appalachian population of juncos that lives up in the mountains all through the seasons, never migrating.

And lest we thought it was a fluke, we were on another hike just 10 days ago in the mountains of Virginia. There they were – more juncos.

Snowbirds in July. Who knew? Always something more to learn.
Posted by Warren and Lisa Strobel at 7:46 AM