An Oldie is not a Goodie for Male Sparrows 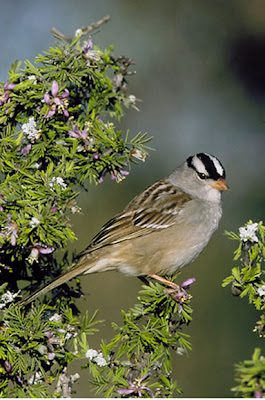 If this White- Crowned Sparrow wants to make it with the ladies, he won't be singing "Free Bird".

This from Livescience.com:
For male sparrows looking for a mate or trying to defend their turf, it pays to keep up with the times and latest musical hits.

A new study finds that female white-crowned sparrows pay more attention to new bird songs than vintage tunes, and that other males find the oldies much less threatening.

Previous studies have shown that the bird songs of a single species can vary population by population. The new work, detailed online in the journal Evolution, shows the songs can vary significantly over time as well. It might also show how, across evolutionary time, one bird species becomes two.

Duke University graduate student Elizabeth Derryberry played two versions of male songs to other sparrows: One was a recording made in 1979 and the other was a more modern version from 2003.

Differences between the two songs were subtle: the 1979 recording starts out with a higher pitched whistle and ends with rapid trills. The newer song starts with a lower whistle and has extended trills at the end.

But the female sparrows clearly preferred the newer version of the birdsong and would do a little “dance” after hearing it. They arched their backs, raised their tails and beaks and performed a come-hither flutter with their wings. If they really liked it, the female birds would begin to dance before the song was even over.

Reception of the old song was less enthusiastic. “It’s not that they don’t respond at all,” Derryberry said. “It just isn’t as interesting to them.”
Posted by Warren and Lisa Strobel at 7:49 AM