Great Place to Get A Life Bird 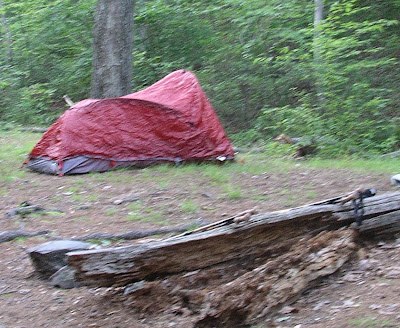 In the tent. Seriously. Lisa and I had just seriously crashed out at Pinefield Hut, a shelter on the Appalachian Trail, in Shenandoah National Park, after hiking 17 miles over hill and dale - a new personal 1-day best. It was a great hike, but we had to move too fast to do any serious birding - just the usual, like Indigo Buntings, Red-Eyed Vireos and Towhees.

As our eyes clamped shut and our brains began to shut down with the last light fading from the sky, and a crescent of moon showing, we heard a call not far off in the distance: Whip-purrrr-will! Whip-purrrrr-will! A Whip-poor-will!! This was a sound I have always wanted to hear! (Lisa now recalls hearing it as a young Princess, growing up near Annapolis).

Just in case you are wondering, idenitfying a bird by its call, even if you haven't seen it, is legitimate, according to the American Birding Assocation's rules, which state that "identification may be by sight or sound." I feel that his is particularly legitimate for nocturnal birds, such as the Whip-poor-will.

The Cornell Lab of Ornithology says that Whi-poor-wills are believed to be declining in population, although good census data is hard to come by.

We've seen birds in strange places before. Like the Great Horned Owl hanging on for dear life to a lamp post in the parking lot at Corpus Christi, Texas, airport, after we had landed there in a stiff wind. Or the Eastern Kingbird I once saw on a bush just yards away from Merchant's Tire & Auto in busy downtown Annapolis.

Birdcouple's reminder to self: Always keep your eyes (and ears) open!


Posted by Warren and Lisa Strobel at 6:54 AM

I believe it to be legitimate too but that doesn't mean that you wouldn't want to see it if you had the chance-Seeing nocturnal birds is tough though-I haven't really seen that many owls.

Proof that I could learn a lot from you folks: I didnt realize that Whi-poor-will was hyphenated.

Paige: Don't be cheeky. You could learn a lot from us.. Become a birder! You know you want to...