Bird of the broad and sweeping wing… 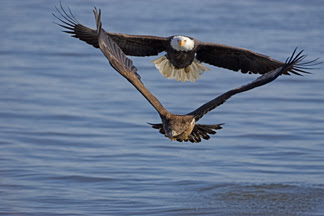 The Bald Eagle was removed from the Endangered Species Act's "threatened" list today. This is a real victory and news worth celebrating because protection under the Act rarely leads to a successful return of the species.

Of the 1,300 species that have been listed under the Act, the recovery rate is only about 1 percent.

Under the Bald Eagle’s previous “threatened” status, the Bald Eagle, as well as its nesting grounds were protected. The birds will be now protected under the Bald and Golden Eagle Protection Act which prohibits anyone from killing, wounding, or disturbing bald eagles. The Act does not protect the habitat where Eagles nest.

And that is the major reason for not celebrating the Eagle’s delisting today.

Bald Eagle nesting habitat is often on the edge of small rivers. Other birds including the #7 Common Bird in Decline, the Common Tern, nest along similar bodies of water.

People like to nest along small rivers too, which makes these habitats prime targets for development.

The U.S. Fish and Wildlife Service is confident that the Eagle’s new listing will not cause a decline in populations.

Hopefully, this confidence is justified.
Hopefully, other species who unwittingly benefited from the Bald Eagle's endangered species status will also not decline.

Posted by Warren and Lisa Strobel at 4:20 PM