Ah, spring!
Yesterday, Warren and I were birding maniacs in search of as many passing warblers and other migrants as possible.
May is the month to catch these travelers in their finest feathers.

We found Bobolinks in their crazy spring outfits: 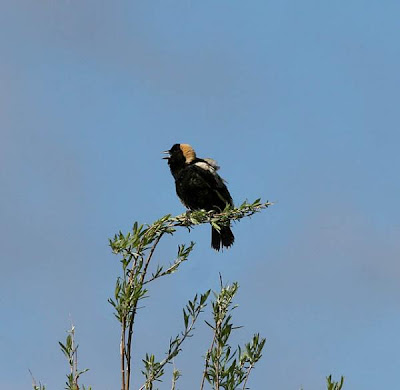 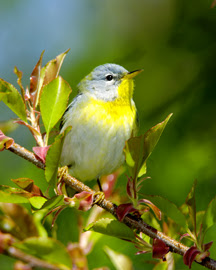 Photo: John Crookes
A Scarlet Tanager feasting for the next leg of his journey north:


When we returned from a day of watching the color parade of travelers and birded around our love nest, we started noticing the slight changes in our non-migratory yard birds. They are still dressed to the hilt. They are still working on their serenades. And, they are still doing some serious eating.

But our local feathered friends have now progressed to brood raising. We saw a fledgling Titmouse who seemed to lack a tail and looked like a large clump of laundry lint.
He managed to hop about from branch to branch without nose diving to the driveway as Mom/ Dad brought insect treats.

The House Finches returned to their usual nest in the eves and we are now learning just how vocal a hungry finch chick can be.

My pal, Cam, fills me in each day on her house guests. The mother of this brood decided to plant her nest in a fancy wreath on Cam’s front door. 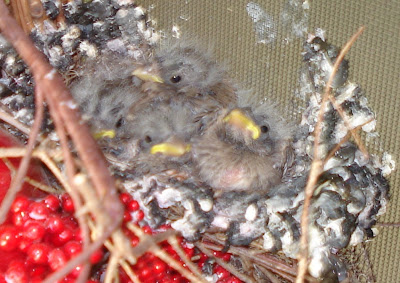 I’m guessing Cardinals. I keep asking Cam what do the parents look like.
Cam, is one really red?
Does one look pink-ish with a crest?

Apparently, the whole photo session is very traumatic. Cam has no idea.
There is just a swooping bird as she stands on tip-toe on a stool peaking inside the wreath.
Cam, you are a brave friend.


Well, assuming they are Northern Cardinals…. Mom and Dad Cardinal would have appeared monogamous, but several studies have proven that Cardinals frequently engage in extra-pair copulations.
Bad Bird Couple!
Northern Cardinals breed between March and September and usually raise two broods a year. The first one in late March and the second in late May to July. The female builds the nest, usually in shrubs or small trees. She lays 1 to 5 white-green eggs.
The male Cardinal has quite a voice, but the female also sings, often from the nest. The female’s songs may give the male information about when to bring food to the nest.
After the chicks hatch, both parents feed the chicks a constant source of insect protein.
Cam, maybe you should start preparing for empty nest syndrome.
The chicks begin leaving the nest 7 to 13 days after hatching.
Posted by Warren and Lisa Strobel at 5:45 PM