A New One for the Yard 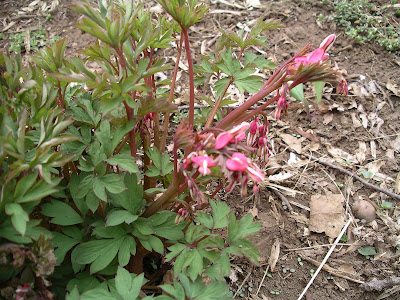 I was out in the garden yesterday checking out all the wonderment that was popping out of the ground. Warren was on the roof doing some spring cleaning. 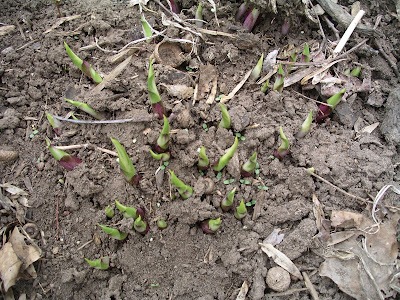 We haven't had many super warm days this spring, so I was enjoying the first bumblebees of the season. Other than that, the insect population was nil. Until this beauty flew by. 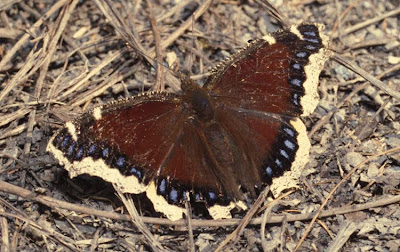 I dropped the rake, in chase across the yard. I also left the ladder unattended, so Warren was stuck on the roof until I could get a good look and dig up the butterfly guide.
Lucky for me, cute husband understands the need to know.
Although, I think Warren was actually hoping to add to his list of birds seen from our roof....

Mourningcloaks are members of the Nymphalidae family, known as the brush-footed butterflies because their front legs are small and hairy. Mourningcloaks got their name because of their resemblance to a traditional dark colored cloak worn when one was in mourning.

So what's this mature butterfly flitting about on the last day of March when there is little to no pollen to feast on?
As adults, Mourningcloaks spend the winter frozen in tree cavities. When they wake from hibernation, they feed on tree sap, (preferably oak tree sap). When tree sap starts to flow in the spring, it often seeps out of the bark in places where the tree was damaged over the winter. The Mourningcloak walks down the trunk and feeds with its head pointing downward.
The Mourningcloak also has the advantage of dark colored wings to help heat up flight muscles in early spring. Butterflies must be warm to fly, and when the days are still chilly, they will bask, or open their wings and angle toward the sun to absorb heat for takeoff.
In addition to basking and feeding on sap, Mourningcloaks are also seeking mates in early spring. With a ten month life span, the Mourningcloak is one of the longest living butterflies. In early spring, the males die after mating and the females follow after laying the next generation.
Most likely, I am already mourning the one I saw yesterday.
Posted by Warren and Lisa Strobel at 5:09 PM

What kind of bulbs are those popping out of your yard?

Paige Darling!
The first pic is of Bleeding Hearts.
The second is Hosta. AKA Deer Food.