On Saturday, Warren and I ventured out in hopes of some early warbler action. Cute Husband discovered Adkins Arboretum about a month ago and I was anxious to check out a new birding spot.

We made a quick stop on Kent Island before heading to the Arboretum and Warren found our first of the year Black Crowned Night Heron blending in with the reeds in a small pond. 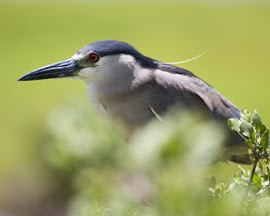 Follow the above link to check out Ed's work. His award winning images are amazing!

Adkins Arboretum is a 400-acre native garden on Maryland’s Eastern Shore. Their mission is to promote the appreciation and conservation of native plants of the Delmarva Peninsula. The Arboretum boasts 4 miles of paths through woodland, wetland and meadow.

Bring on the birds!

Almost immediately we were treated to bluebirds soaring around the parking lot followed by sparrows galore as we walked the path to the wetland. Chipping, Swamp and Field Sparrows were a lively welcome to this beautiful place.

Once we entered the woods, the trees weren't exactly dripping with birds, but it really didn't matter. We were struck by the sheer beauty of the place. Wooden bridges cross creeks lined with Skunk Cabbage. 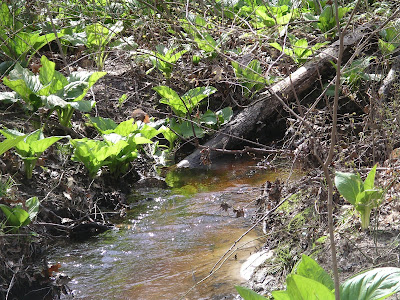 Skunk Cabbage unfolds its cigar-like bright leaves in early spring to soak up as much sun as possible before the leaf canopy emerges. Skunk Cabbage is a busy little plant even before its leaves emerge.

This cabbage has the ability to to produce enough heat to melt away frozen ground and to produce a flower. The heat helps spread a foul odor, which gives this cabbage its name, and attracts pollinators such as carrion-feeding insects.

BirdCouple had no clue about Skunk Cabbage until we ran into Beverly, a naturalist who invited us to join her walk through the Arboretum. Beverly knew just about everything that was popping out of the ground and a ton about how the natural systems of the forest work. 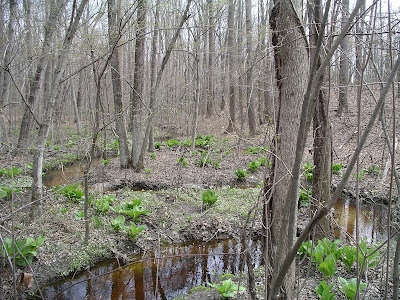 Beverly explained the importance of this braided creek that flows into the Tuckahoe River. The bends in the creek slow the water down, allowing pollutants to be filtered before dumping into the river. The creek's tea colored water is caused by the tannins in the leaf litter. These tannins also help filter water. 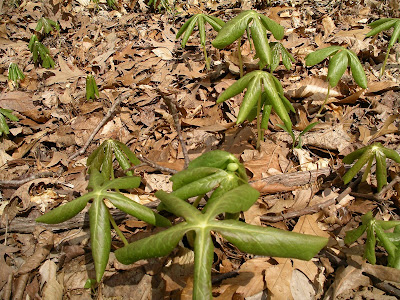 Before yesterday, the only thing I knew about Mayapple was that the deer in our woods love it and one time my great uncle made some wine from it.

Beverly taught us that only Mayapples with a fork in the stem and two leaf heads are mature enough to produce fruit (see above center). The leaves are deadly poison (apparently not to deer), but you can make some tasty jelly from the berry.

While I was inspecting the Mayapples, Warren taught Beverly about this beauty who was hanging out in the trees above. 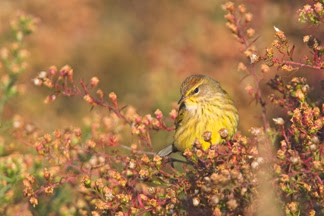 Yes! A Palm Warbler! Now it is starting to feel like spring!

We rounded the corner and Beverly was beyond excited to show us a Serviceberry (AKA Shad Bush). Very cool!

Birds love Serviceberries in the summer when they produce boat loads of fruit, but I had never seen them in bloom. 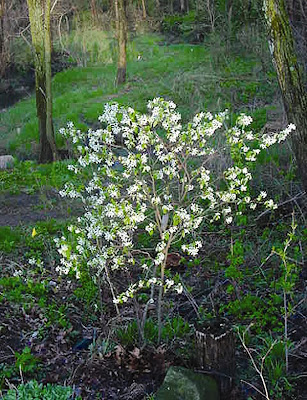 I always assumed that they got their name for the service they provided in feeding the deer, insects and birds. Not so.
According to folklore, when the Serviceberry started to bloom, the ground had thawed enough to perform burial services for those who died during the winter.

Before we parted ways and after I repeatedly tried to coerce Beverly into letting me dig up some Skunk Cabbage for my garden (not allowed in an arboretum), she asked us to do a wonderful thing.


Beverly asked us to feel a tree. It was a big 'ole Poplar Tree. I haven't really done that since I was a kid.

Posted by Warren and Lisa Strobel at 11:32 AM