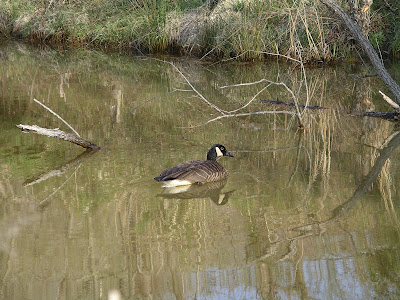 As most birders know, in 2004 the American Ornithological Union divided what were then the nine subspecies of the well-known Canada Goose into two species: the existing Canada Goose and the new Cackling Goose. To be honest, I still have trouble telling the difference between the two sometimes, as IDs like this can be a bit tricky.

I photographed this goose Monday at a small natural area in Prince George's County, MD, outside Washington, DC. (It's one of a half-dozen places I often bird for 30 minutes on my way to work). 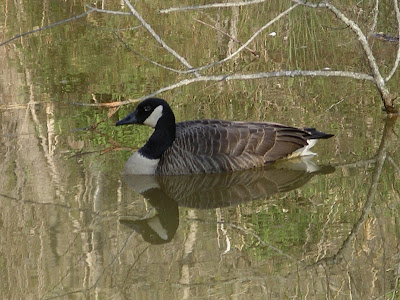 Here's a closer-in shot. This bird caught my eye for a couple of reasons - its small size, generally darker color and the prominent white eye ring. I was hoping it was a Cackling Goose, which are much more uncommon than the ever-present Canada, and generally breed on the northern tundra of North America.


After looking at this picture and doing some research, however, I think it's more likely that this is simply an immature Canada Goose. Other opinions welcome!

For further reading, David Sibley has an excellent, if somewhat technical, discussion on the difference between the two species (and nine total subspecies) ...

And here are some really amazing photos illustrating the difference between the two birds.

Now my laptop battery is about to die.. all for now...
Posted by Warren and Lisa Strobel at 6:36 PM