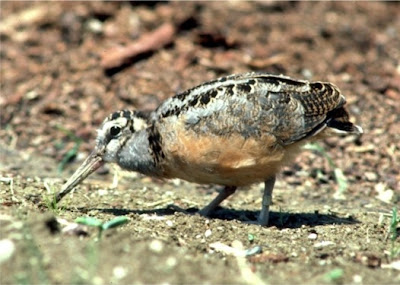 Normal people are asleep at 4:30 AM. Normal people stay under the covers on Sunday mornings when the temperature reads 28 degrees.

Warren and I met some of the members of our local birding club at 4:30 AM this morning in search of the American Woodcock (AKA Timberdoodle).

The American Woodcock is a particularly cool bird which is rarely seen during the day because they are mostly silent and their plumage blends in perfectly with dead leaves.

In the spring, however, the male American Woodcock puts on quite a show to attract females. Plural female. Woodcocks are polygamous and in the battle to ensure his DNA is spread thick, the male starts the morning or ends the day by repeating a nasal, somewhat mechanical "peent" sound from the ground.

He then performs a spiraling flight display. As the Woodcock ascends, his wing feathers produce a twittering sound. He hovers for a bit and then begins to chirp as he dives toward the ground, landing silently next to a female, where he will once again "peent".

Very stirring! We witnessed it all as the sun rose and the full moon set and a Barred Owl called from across the marsh.

BTW, the male Woodcock is really into his little sky dance. He gives no parental care to his earthworm eating family and will continue to display long after most of the females have laid eggs.

The females seem to dig the show, though, as they often keep visiting even while they care for their young.

Must be a relaxing entertainment break after a long day of monotonous earthworm hunting.
Posted by Warren and Lisa Strobel at 4:51 PM

The hole observation act of the male Timberdoodle should had been interesting.

Yeii !! I have learn something today about birds...I am realy honored to se how much work have you put into these article.