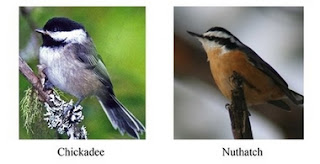 Apparently red-breasted nuthatches do. Two researchers, from the University of Washington and the University of Montana, played recorded "alarm calls" of chickadees, who use different vocalizations to warn of different kinds of predators. They found that not only did the nuthatches respond to the general alarm given off by another species, they exhibited behavior that indicated they were reacting to the specific threat the chickadees were "talking" about. In other words, they had learned chickadee language!

More on this interesting story here.

In another potentially major story for bird-lovers (and -listers), ScienceDaily is reporting that researchers claimed to have found a new bird species in the United States - specifically in Idaho. The purported species, called the South Hills crossbill, is said to be morphologically and vocally distinct from other crossbills that inhabit the same territory, and almost never interbreeds with them.

This is certain to cause huge debate - and more birding trips to Idaho...
Posted by Warren and Lisa Strobel at 8:44 PM