Here is what one Long-eared Owl saw through yellow eyes this morning: 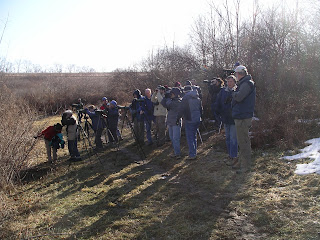 A long look at a Long-eared Owl is quite a treat for any birder because (like most owls) they are nocturnal. They roost during the day, usually within the thickest part of the forest. And, when roosting they just happen to look exactly like a tree branch.

Bob Ringler, co-author of The Field List of the Birds of Maryland, discovered the bird a week or so ago and was kind enough to lead a throng of birders directly to the roost this morning.

For some silly reason, Warren and I thought it just might be us and 4 or 5 other birders.... 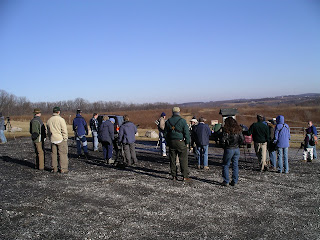 There was at least one scope for every 3 birders

The Long-eared fellow did not disappoint (Hooray!) and showed in one of the known roosting areas, giving everyone great looks of its dark orange face, yellow eyes and crazy long ear tufts.

Plus, we got to catch up with some old birding buds who we had last seen at..... was it the Kelp Gull or was it during the hunt for the Yellow-headed Blackbird?

Funny, it is rarely the location you remember, but rather what bird you were chasing. Although, birding or specific bird chasing usually takes us through or to somewhere lovely that we would have never discovered had it not been for the bird. Today it was through old farmland, over rolling hills to a piece of MD State Land with forest and fields. 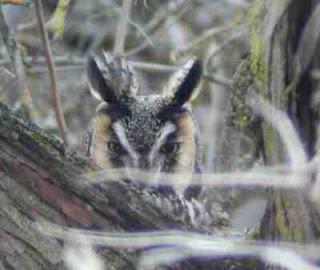 I told you he had crazy ear tufts.

Posted by Warren and Lisa Strobel at 11:37 AM