In the early 1930’s, pioneer conservationists and hunters noted a rapid decrease in the number of wild ducks and geese. The decline in waterfowl was created by two issues: over hunting and the drainage of millions of acres of marsh nesting sites for conversion to farmland.

This concern gave birth to The Migratory Bird Hunting Stamp Act in 1934, and created the first annual issuance of the Duck Stamp. Under The Duck Stamp Act, hunters of legal waterfowl were required to sign and carry a current Duck stamp along with a state-hunting license. 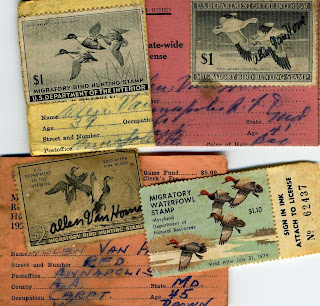 The first stamp cost $1 and per the Act, the majority of funds were to be used to purchase and maintain waterfowl refuges. In 1938-39, over 1 million Duck Stamps were sold. 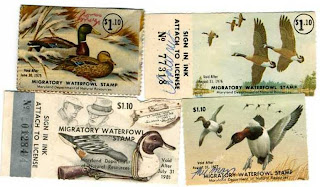 In 1949, Congress raised the price of the stamp to $2 to offset rising costs and expand efforts in waterfowl conservation. 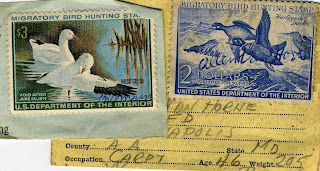 In 1958, the price of the stamp increased to $3. The Secretary of the Interior was also given the authority to open up to 40% of some migratory bird refuges to the hunting of game birds. 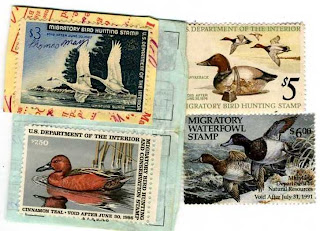 In March 1972, the cost of the Duck Stamp was raised to $5. The 1971-72 hunting season was the peak of Duck Stamps sales, with more than 2.4 million individual stamps sold. 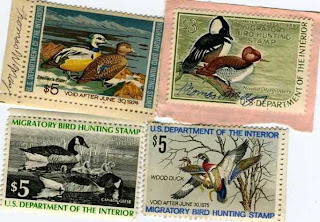 In 1976, Congress changed the official name to the Migratory Bird Hunting and Conservation Stamp.

The Duck Stamp still costs only $15 today.
Since 1934, sales of Duck Stamps have generated more than $670 million and purchased or leased over 5.2 million acres of habitat.
However, with the decrease in hunting, Duck Stamp sales are on the decline.
As birders, we need to do our part to ensure that habitat exists for the birds we enjoy, just as hunters in the past have done.

The Duck Stamp is one of the most efficient conservation donations you can make, as 98 cents of every dollar goes into a fund to purchase or lease wetland.
What has the purchase of this little stamp done in the past?

These are just some of the many refuges that are considered Important Birding Areas (IBAs) with the % of property acquired through the sale of the Migratory Bird Hunting and Conservation Stamp. 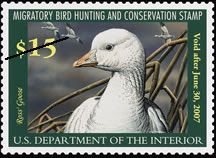 As an added bonus, the purchase of a Duck Stamp also gives you free admission to these and all NWRs.

You can find the Duck Stamp at your local Post Office, online and also through the Georgia Orntholigical Society.

Posted by Warren and Lisa Strobel at 7:51 AM