March must be the month for owls.

The American Bird Conservancy reports today that ornithologists have seen the extremely rare Long-Whiskered Owl in the wild for the first time in Peru.

The extremely rare Long-whiskered Owlet (Xenoglaux loweryi), a species that wasn’t discovered until 1976, and until now was only known from a few specimens captured in nets after dark, has been seen in the wild for the first time by researchers monitoring the Area de Conservación Privada de Abra Patricia – Alto Nieva, a private conservation area in Northern Peru. The sighting is considered a holy grail of South American ornithology and has not been accomplished in thirty years, despite the efforts of hundreds of birders.


Here's another pic of this crazy-looking guy: 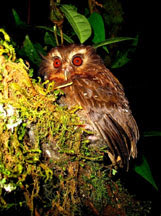 More pics can be found here.

Posted by Warren and Lisa Strobel at 4:20 PM